Award-winning regional manager for Jay’s Potato Chips Clyde Martin never ate snack foods until he moved to Chicago in 1955. Born on September 28, 1936, on land his father owned in Bolivar County, Mississippi, Martin attended school at the White Star Missionary Baptist Church and later graduated from Cleveland (Mississippi) Colored Consolidated High School (CCCHS) in 1955. An honor student and an activist, young Martin led a student strike for a more relevant curriculum. Later, he refused to cooperate with an agreement his principal made with the state of Mississippi to impress the federal government, under which the school was to receive new school buses, and then exchange them with the white school in Cleveland, for their old ones.

In 1956, Martin was working in Chicago when he found out about a job at Jay’s Potato Chips. Hired as the first black route salesman, he determined that he could sell more Jay’s by distributing more of the smaller five cent bags. Martin was right and he more than doubled his sales. Consistently the top salesman during the 1960s and 1970s, he made assistant regional sales manager in 1967 and was the first African American to rise to regional sales manager in 1973. Martin fought racism and personally made sure that Jay’s hired other African Americans as drivers and salesmen.

Martin became an inspector for the Internal Affairs Division of the Cook County, Illinois, Sheriff’s Department in 1978. He was a beloved behind-the-scenes activist in Chicago politics and civic life. 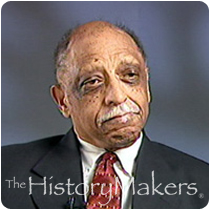 Tape: 1 Story: 4 - Clyde Martin talks about methods of survival employed by black farmers in the South

Tape: 1 Story: 8 - Clyde Martin recalls watching his parents bury money in the ground as a child

Tape: 2 Story: 4 - Clyde Martin talks about the beginning of his career at Jays Foods

Tape: 3 Story: 1 - Clyde Martin talks about his definition of an "Uncle Tom"

Tape: 3 Story: 2 - Clyde Martin describes how he defines the difference between "Uncle Toms" and "sambos"

Tape: 3 Story: 7 - Clyde Martin talks about political positions he has run for

Tape: 3 Story: 9 - Clyde Martin talks about why he seldom returns home to Mississippi

Tape: 3 Story: 10 - Clyde Martin reflects on his life and legacy