Corporate executive H. Mitsy Wilson was born on December 13, 1950 in Georgetown, Guyana. She grew up in New York, where she spent her formative years. Wilson graduated from the College of Mount Saint Vincent with her B.A. degree in sociology and social work.

In 1972, Wilson worked as a commercial coordinator for the New York broadcast station WPIX-TV. In 1973, she was hired as a social worker for the Seamen’s Society for Children and Families. Wilson went on to work for the New York Board of Education as director of counseling and special projects. In 1981, she was hired at New York Airlines, where she worked as both manager of training and consumer relations and manager of consumer affairs and baggage services until 1986. Continental Airlines acquired New York Airlines in 1986 and Wilson was promoted to director of consumer affairs and training.

In 1988, Wilson was hired as manager of management training and diversity at Times-Mirror Cable Television. She was promoted to director of leadership development and diversity at Times-Mirror Company in 1995; and, in 1999, she was named corporate vice president of leadership and organizational development. Then, in 2000, Fox Entertainment Group hired Wilson as senior vice president of diversity development, where she was responsible for development, execution and evaluation of all diversity initiatives. The appointment made her the highest-ranking African American female executive at the company. In 2005, she assumed responsibility for all diversity efforts for News Corporation. In 2011, Wilson became a founding partner of ForAfrica, an international consultancy firm specializing in leadership development solutions.

Wilson has received numerous awards, including the New York Governor’s Award in 1980, the Minorities in Broadcasting’s Phoenix Award in 2003, the 2006 NAACP President’s Award, and the 2010 Corporate Executive of the Year Award from the Jewish Community Relations Council of New York. She is the Chairperson of Workplace Hollywood, a non-profit organization dedicated to developing, training and placing a diverse workforce in entertainment, and is a former member of the UCLA Medical Affairs Board, Nielsen Media Research African American Advisory Council, and Howard University School of Communications Board.

Wilson lives with her husband, Greg James, and has two daughters, Meisha and Alia; a stepdaughter, Shermian; and three granddaughters, Sherine, Shermika and Esther.

H. Mitsy Wilson was interviewed by The HistoryMakers on December 20, 2013. 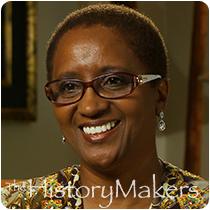 Corporate executive H. Mitsy Wilson (1950 - ) was a founding partner of ForAfrica and worked in diversity management for over twenty-five years. She became the Fox Entertainment Group’s first senior vice president of diversity development in 2000.

Tape: 1 Story: 7 - H. Mitsy Wilson talks about her father's role in her upbringing

Tape: 1 Story: 10 - H. Mitsy Wilson describes her parents' personalities and who she takes after

Tape: 5 Story: 10 - H. Mitsy Wilson recalls the start of her activism in Africa

Tape: 7 Story: 4 - H. Mitsy Wilson describes how she would like to be remembered

Marion McElroy, born on March 16, 1922, was the third of four children born to Ruth Jordan-Majors and Andrew Majors in Minneapolis, Minnesota, where she resides today. McElroy has given many years in service to her Twin Cities community.

She has been a member of the NAACP, the Urban League, the Minneapolis Socialites, U Meet Us and the American Association of Retired persons (AARP). She was one of six people chosen to oversee activities of the 635,000-member AARP Minnesota, where she has served as a Diversity Outreach Specialist and has been a member since 1984. She was a board member for 20 years at the Phyllis Wheatley Community Center, the oldest African American institution in the Twin Cities, where she has been involved for most of her lifetime. McElroy has also served as the Youth Employment Director for the National Alliance of Businessmen, on the Minnesota Board on Aging, as the Wallin Scholarship Coordinator for the Friends of North High School, as the secretary to the Minneapolis Socialites, and has been an active parishioner at the St. Peter's A.M.E. Church for 42 years. From 1969 to 1986, McElroy worked for Northwestern Bell, for whom she coordinated the continuing Corporate Minority Business Exchange event to promote minority owned and operated businesses. 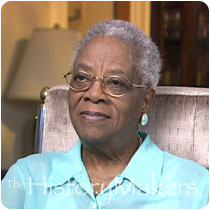 Tape: 1 Story: 6 - Marion McElroy describes the sights, smells, and sounds of her childhood

Tape: 1 Story: 10 - Marion McElroy talks about her experience as an African American at Sumner Elementary and Junior High School in Minneapolis, Minnesota

Tape: 2 Story: 8 - Marion McElroy describes the jobs she took after graduating from North High School in 1940

Tape: 2 Story: 9 - Marion McElroy talks about her first marriage to Chester Johnson in 1945

Tape: 3 Story: 1 - Marion McElroy talks about her domestic work before her being hired to work at Strutwear Knitting Company in 1947

Tape: 3 Story: 2 - Marion McElroy talks about purchasing and building a boarding house in 1947

Tape: 3 Story: 3 - Marion McElroy describes her marriage to Walter McElroy and relocating to Cleveland, Ohio in 1951

Tape: 3 Story: 4 - Marion McElroy describes living in Cleveland in the 1950s as a realtor

Tape: 3 Story: 6 - Marion McElroy talks about working at Northwest Bell in 1969 and as the Youth Director of the National Alliance of Business in 1974

Tape: 3 Story: 7 - Marion McElroy talks about developing political relationships as the Youth Director for the National Alliance of Business from 1974 to 1977

Tape: 3 Story: 8 - Marion McElroy talks about her experience as the Coordinator of the Minority and Women's Business Enterprise Program at Northwestern Bell in 1977

Tape: 4 Story: 1 - Marion McElroy talks about traveling across the country working at Northwestern Bell from 1974 to 1986

Tape: 4 Story: 3 - Marion McElroy talks about the history of the black community in Minnesota

Tape: 4 Story: 4 - Marion McElroy reflects on how her mother helped her succeed as an executive

Tape: 4 Story: 5 - Marion McElroy describes what she wants her legacy to be

Tape: 4 Story: 6 - Marion McElroy talks about how she wants to be remembered

Tape: 4 Story: 7 - Marion McElroy talks about visiting Las Vegas, Nevada and Chicago, Illinois, and those she knows there