Psychologist and Africana studies professor Jerome Taylor was born on January 26, 1940 in Waukegan, Illinois to Willie Mae Taylor and George Washington. Taylor earned his B.A. degree from the University of Denver in 1961, and his Ph.D. degree in clinical psychology from Indiana University Bloomington in 1965.

Taylor served as a consulting editor for the Journal of Consulting and Clinical Psychology, and has published articles in a number of scholarly journals. He has also presented his research and development activities at numerous institutions of higher learning, including Howard University, Hampton University, Florida A & M University, Princeton University, Yale University, and Oxford University.

Originally conceived in 1970, Taylor founded the Institute for the Black Family at the University of Pittsburgh and the Center for Family Excellence, Inc. in 1988, which serves Allegheny County, and went on to serve as its executive director, president and founder. The Center for Family Excellence, Inc. has received the Alfred W. Wishart Jr. Award, and its violence prevention program has been rated as the best in the Commonwealth of Pennsylvania.

Taylor’s awards include the University of Pittsburgh Chancellor’s Distinguished Public Service Award; University of Pittsburgh Black Alumni Pioneer in Civil Rights Award; the Distinguished Research Award from the International Association of Black Psychologists; the Kujichagulia Award from the Sankofa Institute of Pittsburgh; and the Norman Dixon Award for Outstanding Black Faculty Member. Taylor is a member of the Association of Black Psychologists and the National Institute of Black Child Development.

Jerome Taylor was interviewed by The HistoryMakers on June 10, 2014. 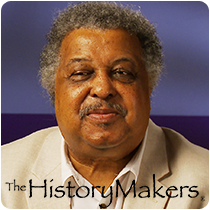 Psychologist and africana studies professor Jerome Taylor (1940 - ) served as director of the Clinical Psychology Center, chair of the Graduate Program in Social Psychology, and associate professor and chair of the Department of Africana Studies at the University of Pittsburgh. Taylor also established and served as executive director, president and founder of The Center for Family Excellence, Inc.

Journal of Consulting and Clinical Psychology

Institute for the Black Family

African American studies professor and psychologist Nathan Hare was born on April 9, 1933 in Slick, Oklahoma. As a young age he experienced segregation and tense race relations in Oklahoma. Hare planned on becoming a professional boxer until one of his high school teachers suggested he attend college, where he took sociology classes and switched his major from English to sociology. In 1954, he received his A.B. degree from Langston University in Langston, Oklahoma. In 1957, he earned his M.A. degree from University of Chicago. In that same year, he married his wife, Julia Hare, also a noted psychologist and sociologist. Five years later, in 1962, he earned the first of two Ph.D. degrees. The first Ph.D. degree in sociology was from the University of Chicago and the second Ph.D. degree, awarded from the California School of Professional Psychology in 1975, was in clinical psychology.

In 1961, he became an instructor and assistant professor in sociology at Howard University in Washington, D.C. Some of his students included Stokely Carmichael and Claude Brown. Later, in September 1966, he wrote a letter to the editor of the The Hilltop, Howard University’s student newspaper speaking out against then Howard University president James Nabrit’s plan to turn the university’s student body sixty percent white by 1970. As a result Hare was fired in 1967. In 1968, Hare joined the faculty of San Francisco State College (now San Francisco State University) and became the program coordinator of the school's Black Studies program, the first in the United States. This has earned him the title "father of Black Studies" by scholars. As the program coordinator, Hare created the term "ethnic studies" to replace the more pejorative "minority studies." Hare battled with the college administration and left the college just a year later, in 1969. Needing a way to express his thoughts and the ideas of others, he founded the scholarly periodical, The Black Scholar: A Journal of Black Studies and Research in 1969. He left the journal in 1975 to work as a clinical psychologist in community health programs, hospitals, and in private practice. In 1979, he co-founded the Black Think Tank with his wife, Julia Hare. The Black Think Tank addresses the problems and concerns that plague the African American community.

Throughout his career, Hare has served as a consultant and given numerous lectures and presentations. Furthermore, he has written several books and articles including The Black Anglo Saxons, The Endangered Black Family, Bringing the Black Boy to Manhood: The Passage, Crisis in Black Sexual Politics, and The Miseducation of the Black Child. He has been the recipient of many awards such as the Joseph Hines Award for Distinguished Scholarship from the National Association of Black Sociologists, Scholar of the Year Award from the Association of African Historians, and the Lifetime Achievement Award from the National Black College Alumni Hall of Fame. Hare was also awarded the National Council for Black Studies National Award for his distinguished scholarly contributions to Black Studies. Throughout his life, his love of boxing and learning has helped him to fight for social justice.

Nathan Hare was interviewed by the The HistoryMakers on April 5, 2004. 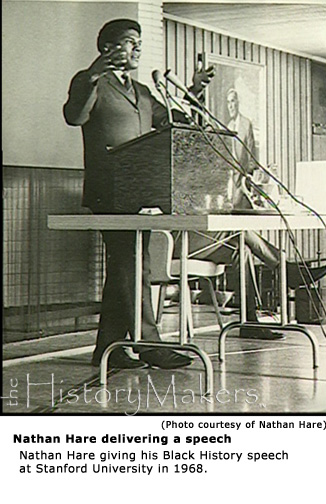 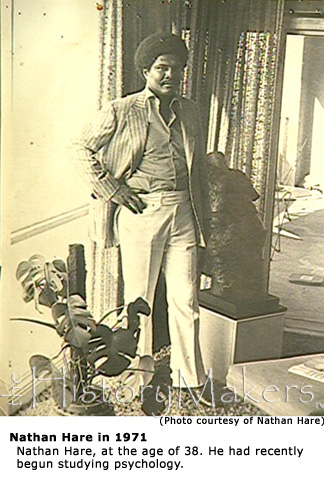 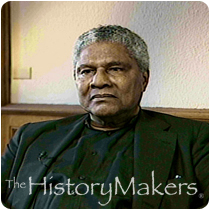 Psychologist and african american studies professor Nathan Hare (1933 - ) became the coordinator of the nation’s first Black Studies Program at San Francisco State College, worked as a clinical psychologist in community health programs, hospitals, and private practice, and established The Black Think Tank, which focuses on issues affecting the black family. He is the author of many books and articles and is the recipient of numerous awards.

Tape: 1 Story: 9 - Nathan Hare describes growing up on a farm in Slick, Oklahoma

Tape: 2 Story: 1 - Nathan Hare describes the sights, sounds and smells of growing up on a farm in Slick, Oklahoma

Tape: 3 Story: 1 - Nathan Hare describes the recognition he received from boxing and the deterioration of Landmark Baptist Church in Slick, Oklahoma

Tape: 3 Story: 3 - Nathan Hare talks about being awarded the Danforth Fellowship and going to the University of Chicago in Chicago, Illinois

Tape: 3 Story: 4 - Nathan Hare talks about his influential teachers in college and graduate school, and taking a teaching position at Howard University in Washington, D.C.

Tape: 3 Story: 9 - Nathan Hare talks about the end of his boxing career and the inspiration behind his book, 'The Black Anglo-Saxons'

Tape: 4 Story: 1 - Nathan Hare describes his concern about the race issue before the Civil Rights Movement

Tape: 4 Story: 2 - Nathan Hare talks about his introduction to the Civil Rights Movement

Tape: 4 Story: 3 - Nathan Hare describes his involvement in the Black Power Committee at Howard University and putting up bail for H. Rap Brown

Tape: 4 Story: 4 - Nathan Hare talks about the formation of the Department of Black Studies at San Francisco State University in 1968

Tape: 4 Story: 8 - Nathan Hare talks about getting his Ph.D. in Psychology at the California School of Professional Psychology in San Francisco, California

Tape: 5 Story: 2 - Nathan Hare describes being a boxer and an academic

Tape: 5 Story: 3 - Nathan Hare talks about his regrets in life

Tape: 5 Story: 5 - Nathan Hare describes how he would like to be remembered

The dynamic motivational lecturer, relationship expert, author, social commentator and educational psychologist Dr. Julia Hare was born in Tulsa, Oklahoma. Hare has appeared on several television programs offering her expertise and insights on male/female relationships, gender interactions in the workplace, mate selection, toxic relationships and matrimonial harmony. She has appeared on CNN & Company, C-SPAN, Tony Brown’s Journal and Inside Edition. Hare has also spoken before the Congressional Black Caucus, participated in Tavis Smiley’s “State of the Black Family” Conference and spoke at the annual Essence Empowerment Seminars at the Essence Magazine Culture Festival. Her written work has been featured in several magazines and newspapers including The New York Times, The Washington Post, and The Miami Herald. Hare and her husband co-authored The Endangered Black Family; Bringing the Black Boy to Manhood: The Passage, The Miseducation of The Black Child, Crisis in Black Sexual Politics and How to Find and Keep a BMW (Black Man Working).

Dr. Julia Hare’s work has brought her many awards and honors including Educator of the Year for Washington, D.C. by the Junior Chamber of Commerce and World Book Encyclopedia in coordination with American University; The Abe Lincoln Award for Outstanding Broadcasting, The Carter G. Woodson Education Award, The Association of Black Social Workers’ Harambee Award; the Scholar of the Year Award from the Association of African Historians; and the Lifetime Achievement Award from the International Black Writers and Artists Union. Hare has been inducted into the Hall of Fame of her high school alma mater, Booker T. Washington High, was given a Presidential citation from the National Association for Equal Opportunity in Higher Education and was named one of the ten most influential African Americans in the San Francisco Bay Area.

During graduate school, Hare taught elementary school in Chicago, Illinois integrating music into the student’s lessons. Following a move to California, Hare served as the director of educational programs at the Oakland Museum and later hosted talk shows for both ABC television and KSFO radio stations. She also served as the public relations director in the local federal housing program in San Francisco. 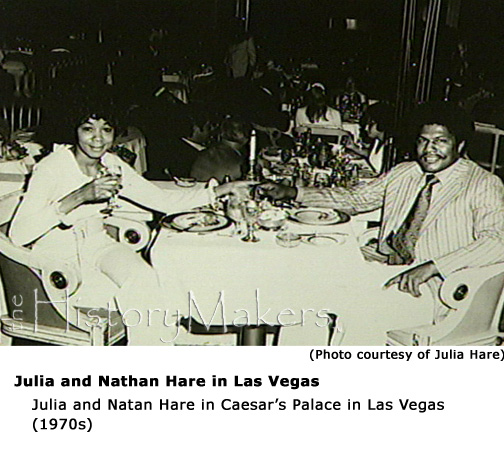 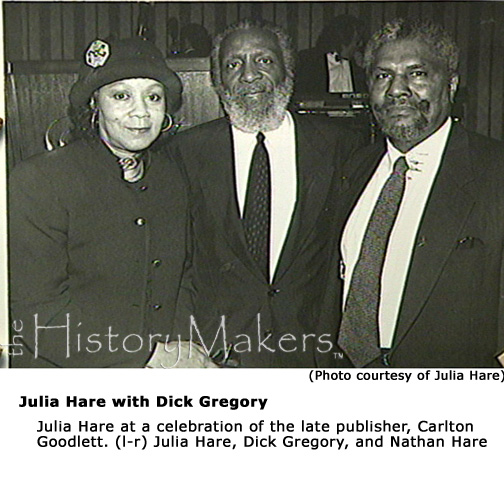 Do You Remember When Common Sense Was Fairly Common? 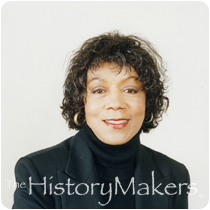 Psychologist Julia Reed Hare (1939 - 2019) was the former director of educational programs at the Oakland Museum and hosted talk shows for both ABC television and KSFO radio stations. Hare also co-founded The Black Think Tank located in San Francisco, California and appeared on several television programs offering her expertise and insights on male/female relationships and other issues.

National Committee against Discrimination in Housing

Tape: 1 Story: 11 - Julia Reed Hare describes her household responsibilities as a child and her religious upbringing

Tape: 2 Story: 5 - Julia Reed Hare describes the segregated schools in Tulsa, Oklahoma, her teachers and her extracurricular activities as a child

Tape: 3 Story: 2 - Julia Reed Hare talks about her work for the District of Columbia Teachers College in Washington, D.C.

Tape: 3 Story: 3 - Julia Reed Hare describes being director of education for the Oakland Museum of California in Oakland, California

Tape: 3 Story: 4 - Julia Reed Hare describes her work for the National Committee Against Discrimination in Housing, Inc. and as a radio host

Tape: 3 Story: 5 - Julia Reed Hare recalls people she interviewed on the radio and teaching others about radio broadcasting

Tape: 3 Story: 6 - Julia Reed Hare describes the content of lectures she gives across the country

Tape: 3 Story: 7 - Julia Reed Hare talks about getting her educational and social psychology degrees at California Coast University and her lectures

Tape: 4 Story: 2 - Julia Reed Hare describes the changes she would like to see for African American students in the schools

Tape: 4 Story: 5 - Julia Reed Hare talks about her desire to write a romance novel and her spiritual growth

Tape: 4 Story: 7 - Julia Reed Hare talks about her proudest accomplishments and her values

Tape: 4 Story: 8 - Julia Reed Hare describes how she would like to be remembered