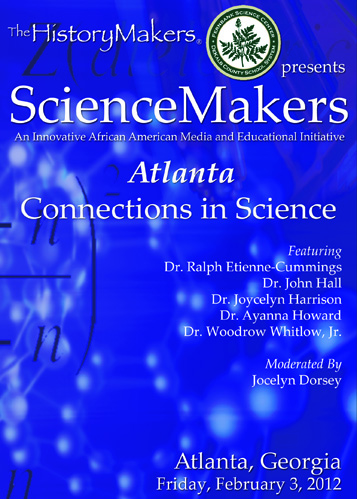 Atlanta: Connections in Science was held at the Fernbank Science Center in Atlanta, Georgia. The scientists discussed their own connections to Atlanta through their work and life. Each presented a slideshow about how they decided to pursue their profession before discussing as a panel their dreams as children, the future of NASA, and what's next for their career. The scientists encouraged students to do what they love and that science careers can lead to many different options - not just those in science. The program was moderated by Jocelyn Dorsey, host of WSB-TV's "People to People." The Fernbank Science Center was one of ScienceMakers' science centers partners in 2012. The participating scientists included: Ralph Etienne-Cummings, roboticist, Johns Hopkins University, John Hall, chemist, Morehouse College Joycelyn Harrison, Program Officer, Airforce Office of Scientific Research, Ayanna Howard, roboticist, Georgia Tech, and Woodrow Whitlow, Jr., Associate Administrator, NASA 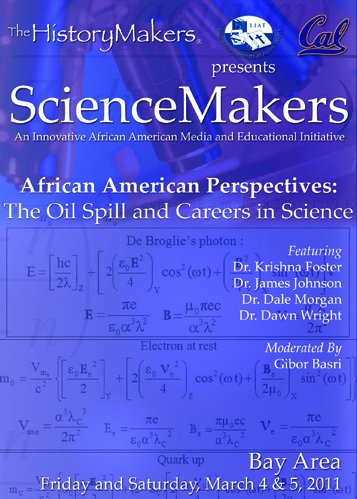 African American Perspectives: The Deepwater Horizon Oil Spill & Careers in Science featured four African American scientists with a background on chemicals and their effect on sea and land. The scientists each presented a ten-minute slideshow about their life as a scientist and why they chose to pursue their path. They were then gathered as a panel to discuss the future of science in helping fix problems like the Deepwater Horizon Oil Spill and their career as a scientist. The moderator of the program was Dr. Gibor Basri, Vice Chancellor of Equity, Inclusion, and Diversity at the University of California, Berkeley. The participating scientists included: Dr. Krishna Foster, Professor of Chemistry, California State University, Los Angeles, Dr. James H. Johnson, Chair, National Advisory Council for Environmental Policy and Technolog,y Dr. F. Dale Morgan, Professor Geophysics, Massachusetts Institute of Technology, and Dr. Dawn Wright, Professor of Geography & Oceanography, Oregon State University. 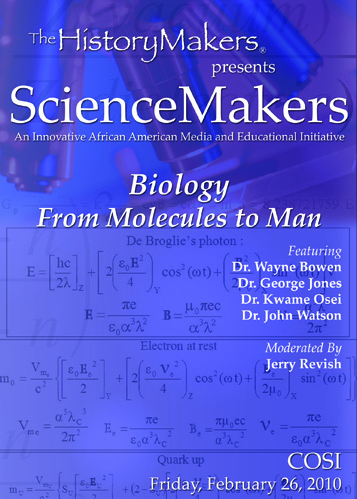 $19.99
ScienceMakers: Biology: From Molecules to Man

Biology: From Molecules to Man focuses on life from brain cells to fungus to the human heart. The scientists each presented a slideshow of their work before answering questions as a panel about their life, their work, and their accomplishments. The scientists answered questions about their role as an African American scientist, being a role model, the role of science and math in youth, and the future of science. The program was moderated by Jerry Revish, WBNS news anchor.  The Center of Science & Industry (COSI) in Columbus was one of ScienceMakers' science centers partners in 2010, 2011, and 2012. The featured scientists included Wayne Bowen, Professor of Neurobiology & Biochemistry, Brown University, George Jones, Professor of Biochemistry, Emory University, Kwame Osei, Cardiologist, The Ohio State University Medical Cente and John Watson, Professor of Biochemistry (ret.), University of California, San Francisco 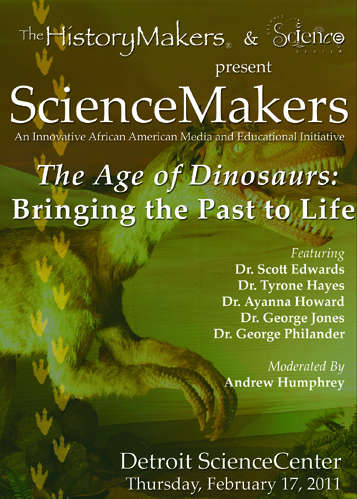 $19.99
ScienceMakers: The Age of Dinosaurs: Bringing The Past To Life

The Age of Dinosaurs: Bringing The Past To Life brought together four scientists relating to the theme of dinosaurs, early earth, and the Dinosaurs: Unearthed exhibit that premiered at the Detroit Science Center on the night of the ScienceMakers program. Each scientist spoke at length about encouraging students to follow their dreams, what first motivated them to pursue science (from the Bionic Woman to The Thing From Another Planet), and why they enjoy what they do. The program was moderated by Andrew Humphrey, Emmy award-winning meteorologist and reporter WDIV-TV Local 4 in Detroit. The featured scientists included: Scott Edwards, Professor of Evolutionary Biology, Harvard College George Jones, Professor of Biochemistry, Emory University Ayanna Howard, Professor of Robotics & Engineering, Georgia Institute of Technology and George Philander, Professor of Atmospheric & Oceanic Sciences, Princeton University 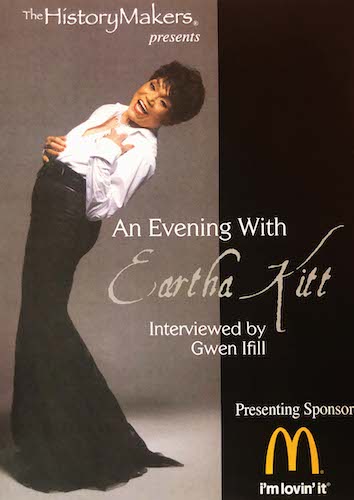 Here is your chance to see an exclusive and heartwarming look into the life of Eartha Kitt. Taped live in Chicago, Illinois at Northwestern University School of Laws Thorne Auditorium on September 20, 2008, PBS journalist Gwen Ifill interviews the glamorous Eartha Kitt as she shares stories of her career on Broadway and television. This program provides rich insight into the life of a versatile star and includes graceful performances of Aint Misbehavin, La Vie En Rose, and Heres To Life. This historic program is the last live interview and performance of Eartha Kitts career. Order your copy of this treasured event on DVD today! 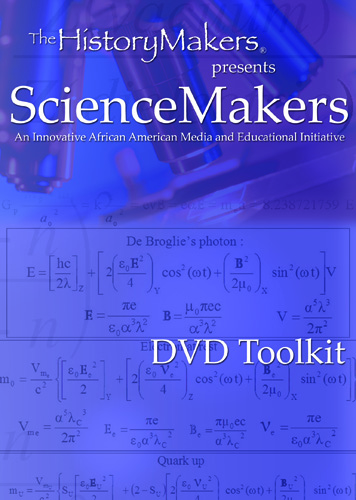 Created with a National Science Foundation grant, ScienceMakers Toolkits are great for use in the classroom. Easy to use and featuring the lives, careers and scientific work of 211 of the nation’s top African American scientists, your students will be asking for more. The toolkit has featured biographies to allow students to compare their background with that of the scientists. They also include easy to use experiments and activities, discussion questions, suggested video clips that are found in the ScienceMakers Digital Archive and much, much more. 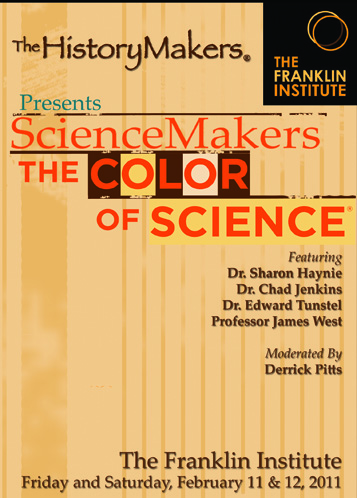 The Color of Science was a conversation between four varied scientists on their experience as an African American scientist.  Joining both the young and old, moderator Derrick Pitts, Chief Astronomer of The Franklin Institute, interviewed each scientist individually before bringing all the scientists together as a panel to talk about their achievements and overcoming obstacles to obtain success.The scientists featured included: Sharon Haynie, Chemist, DuPont, Chad Jenkins, Professor of Robotics, Brown University, Edward Tunstel, Space Robotics & Autonomous Control Lead in the Space Department, Johns Hopkins University Applied Physics Laboratory and James E. West, Professor of Engineering, Johns Hopkins University. 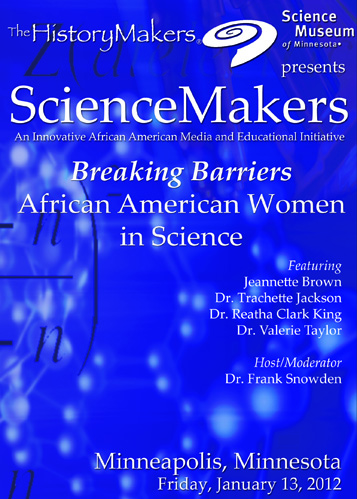 Breaking Barriers: African American Women in Science was the first ScienceMakers public program of 2012. On Friday, January 13, the four scientists and the moderator convened in Discovery Hall to present first one at a time and then as a panel about their life and work. Dinner was served directly preceding the event. The moderator, Dr. Frank Snowden, Professor of Engineering at the University of Minnesota, focused on "The Double Bind" - a paper written by Shirley Malcom and two others about the cost of being a minority woman in science. Each woman explained the impact "the double bind" had on them as well as their first awakenings to science. The Science Museum of Minnesota was one of ScienceMakers' science centers partners in 2012. The participating scientists included: Jeannette Brown, Chemist, Faculty Associate (formerly), Department of Pre-College Programs at the New Jersey Institute of Technology, Trachette Jackson, Professor of Mathematics, University of Michigan, Reatha Clark King, President & Executive Director (formerly), General Mills Foundation and Valerie Taylor, Professor of Computer Science, Texas A&M University 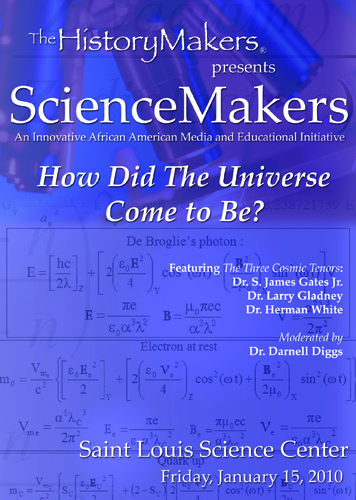 $19.99
ScienceMakers: The Three Cosmic Tenors: How The Universe Came To Be

The Three Cosmic Tenors: How The Universe Came To Be explores the origins of the universe through the work of three renowned physicists. The scientists each presented a slideshow of their work before answering questions as a panel about their life, their work, and their accomplishments. The audience at the St. Louis Science Center was invited to ask questions of the physicists - everything from "What did you like to do when you were a child" to "What are you going to do next?" The panel and question and answer session were moderated by Dr. Darnell Diggs of the Air Force Office of Scientific Research. The St. Louis Science Center was one of ScienceMakers' science centers partners in 2010. The Three Cosmic Tenors are: Dr. Larry Gladney, University of Pennsylvania, Dr. Herman White, FermiLab and Dr. Sylvester James Gates, University of Maryland, College Park. While they don't sing, they do entertain using science! 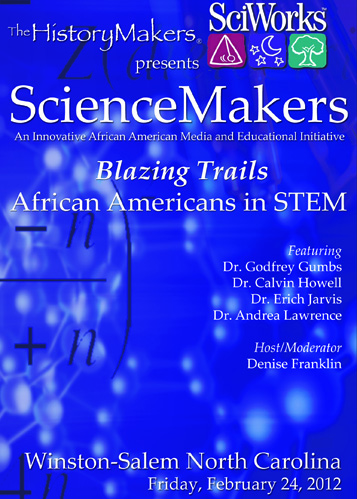 Blazing Trails: African Americans in Science, Technology, Engineering, and Mathematics was held at SciWorks in Winston-Salem, North Carolina. The four scientists and moderator convened in the SciWorks Auditorium to present first one at a time and then as a panel about their life and work. Students were given the chance to ask questions of the scientists ranging from complicated dog tricks to what it was like to be a scientist. The program was moderated by moderated by Denise Franklin, General Manager of WFDD, the local NPR affiliate. SciWorks was one of ScienceMakers' science centers partners in 2012. The participating scientists included: Andrea Lawrence, Professor of Computer Science, Spelman College, Godfrey Gumbs, Professor of Physics, Hunter College, Calvin Howell, Professor of Physics, Duke University, Erich Jarvis, Professor of Neurobiology, Duke University