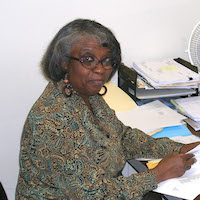 Shirley P. Alonzo has served as The HistoryMakers’ librarian and archivist since 2006 and has over fifty years of librarianship experience. Before joining The HistoryMakers team, Alonzo worked with the Chicago Public Library for fifteen years, where she held positions as reference librarian at the information center from 1989 to 1993 and assistant head of the children’s department at the Woodson Regional Library from 1993 until her retirement in 2004. Prior to her work with the Chicago Public Library, she served as librarian of Chicago’s Joseph H. Jackson Library from 1982 to 1988, indexer for the Bank Marketing Association from 1978 to 1980, and reference librarian at the University of Guyana Library from 1971 to 1977. Alonzo received her M.A. degree in library science in 1981 from Rosary College, in River Forest, Illinois, a diploma in library and information studies in 1971 from Queen’s University Belfast, in Northern Ireland, and her B.A. degree in 1964 from the University of the West Indies, in Kingston, Jamaica.