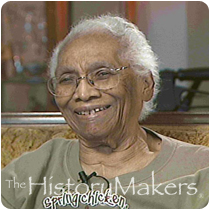 See how Zonia T. Way is related to other HistoryMakers
Donate Now

Way’s first job was in a hat shop in 1925. That same year, she met Walker V. Thomas, a dental student. Soon they married, and Way for many years was an active part of civic life on Chicago’s South Side and in Idlewilde, Michigan. She joined the Church of the Good Shepherd in 1934 and was a member of the Douglass Chapter of the League of Women Voters, the YWCA board, the Meharry Auxiliary and the Dentists Wives Club. After her husband died in 1949, Way made draperies and sold them to clients. In 1960, she married John Way and continued to design draperies and do interior design. A former president of the Seniors Club of Parkway Gardens, Way designs and teaches crafts.

See how Zonia T. Way is related to other HistoryMakers
Donate Now
Click Here To Explore The Archive Today!