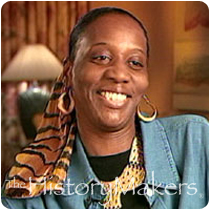 See how Zenobia Washington is related to other HistoryMakers

Artist Zenobia Grant Washington was born in Newark, New Jersey, on November 24, 1966, to J.H. Grant and Susan Armstrong. She graduated from Winyah Senior High School in Georgetown, South Carolina, in 1984. In 1987, Washington received an
A.A. from the Art and Fashion Institute in Atlanta.

In 1998, Washington was deeply affected by the death of her only brother, Trevor, after which she was inspired to embark on a new phase of her life as an artist. Washington began to create handmade dolls of traditional African American women as "The Healer" and "The Washer Woman" that grew into a successful collection she calls "Women of Inspiration."

Washington took a nine-week entrepreneurial course at the Five Rivers Community Development Corporation's Diamonds in the Rough training program, where she learned to run her own business. She has served on the Five Rivers Community Development Corporation's Board of Directors in every capacity except treasurer. She served as the art and culture editor for the International Association of Special Education's newsletter. Washington's artwork has been featured in numerous art galleries and is enjoyed in many private art collections.

Washington married Willie Washington on October 5, 1991 in Georgetown, South Carolina. They have a daughter, Susan Alexis Washington, who was born in on July 29, 1994.

See how Zenobia Washington is related to other HistoryMakers
Click Here To Explore The Archive Today!