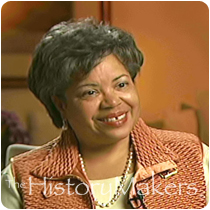 See how Yvonne Jackson is related to other HistoryMakers

Corporate executive Yvonne Ruth Jackson was born on June 30, 1949 in Los Angeles, California. Her father, Giles B. Jackson, was a judge. Jackson’s mother, Gwendolyn Lackey Battle was a teacher. Jackson has a twin sister, Yvette L. Townsend, and an older sister, Mignon W. Jackson. She attended the One Hundred Ninth Elementary School and Jordan High School in Los Angeles. Jackson graduated from high school in 1966, and then attended her aunt Mignon Lewis’ alma mater, Spelman College. In 1970, she received her B.A. degree in history.

Upon graduating from Spelman College, Jackson worked as a personnel manager for Sears Roebuck & Company. In 1979, she became an executive recruiter for Avon Products, Inc. From 1980 to 1983, Jackson was promoted to manager of employee relations and staffing. Jackson then received a certificate in management development from Harvard Business School in 1985. In 1989, she became Avon Products’ Vice-President of Human Resources for the North American division. Jackson went on to work for Burger King Corporation in 1993, Compaq Computers in 1999, and the pharmaceutical company, Pfizer, Inc. as Senior Vice-President of Human Resources. Some of the key responsibilities as senior vice-president included strengthening business growth and development, launching communication and retention programs, structuring global human resource strategy and leadership programs, and developing human resource training and development programs.

Jackson has recently formed her own management and human resources consulting firm, Beecher Jackson. She is the recipient of numerous awards and honors including the 2004 Alumni of the Year from Spelman College. Jackson is currently chair of the Board of Trustees at Spelman College, and serves as a board member for Girls, Inc. and the Institute for Women’s Policy. She also serves on the Advisory Council for the accounting firm of Price-Waterhouse.

See how Yvonne Jackson is related to other HistoryMakers
Click Here To Explore The Archive Today!