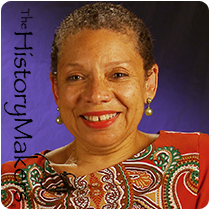 Marketing and nonprofit executive Yvette Moyo was born on December 8, 1953 in Chicago, Illinois to Rudolph and Pauline Jackson. Moyo grew up in Chicago and attended South Shore High School. She graduated from Eastern Illinois University in 1974 with her B.A. degree in Afro-American Studies.

Upon graduation, Moyo was hired at the National Publication Sales Agency to work with the original Blackbook as a door-to-door saleswoman. She was promoted to account executive with the Blackbook and Dollars & Sense magazine, and eventually to the position of senior vice president of sales and marketing. Moyo remained at Dollars & Sense magazine handling branding, national events, and advertising until 1988 when she married Karega Kofi Moyo. They then co-founded the marketing firm, Resource Associates International, Ltd. (RAI) and launched Real Men Cook for Charity, an annual Father’s Day celebration in 1990. In 1992, Moyo launched the Marketing Opportunities in Business & Entertainment (MOBE) advanced marketing symposium series. In November of 2001, MOBE worked co-hosted a White House briefing on African American Business and Technology. Following the success of Real Men Cook for Charities in the 1990s, their Father’s Day events were held in thirteen cities and featured on network TV and in major national publications. These events generated over one $1 million for various nonprofits. Co-founder of the year-round nonprofit organization Real Men Charities, Inc. in 2003, Moyo served as Executive Director until 2013.

Moyo is the co-creator of two books: Real Men Cook: More Than 100 Easy Recipes Celebrating Tradition and Family, published by Kofi Moyo in 2005; and Real Women Cook: Building Healthy Communities with Recipes that Stir the Soul, co-authored with Sharon Morgan in 2012. In 2008, Real Men Cook was honored and showcased on the show “Emeril Live!” and featured on the Al Roker Show in a segment called “Do Good Food.” Moyo was personally honored in 1988 as one of the “100 Women to Watch” in Today’s Chicago Woman. She has also been the recipient of multiple awards, including the Public Relations Advertising and Marketing Excellence Award, the Woman in Entertainment Pioneer Award, the 50 Women of Excellence Award, Trailblazer/Women in the Fatherhood Movement Award presented by Congressman Danny Davis, YMCA’s Black Achievers Award, and the Black Women's Hall of Fame Kizzy Award.

Yvette Moyo was interviewed by The HistoryMakers on August 22, 2013.