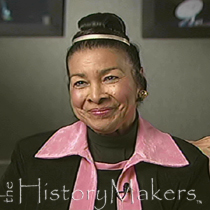 See how Xernona Clayton is related to other HistoryMakers
Donate Now

Clayton's civic involvement and participation in the Civil Rights Movement was informed by the Chicago Urban League, in which she worked to investigate discrimination in employment. As an activist, Clayton was instrumental in coordinating activities for the Doctor's Committee for Implementation project, which culminated with the desegregation of hospital facilities in Atlanta, Georgia. Clayton also worked closely with Dr. and Mrs. Martin Luther King, Jr., helping to organize fundraising initiatives for the Southern Christian Leadership Conference (SCLC). By the mid-1960s, Clayton was writing for the Atlanta Voice, and in 1968, she became the first black woman in the South to host a regularly scheduled prime-time talk show, Variations, which became The Xernona Clayton Show on WAGA-TV in Atlanta. Her guests included Harry Belafonte and Lena Horne. Later that year, Clayton successfully convinced the Grand Dragon of the Ku Klux Klan to renounce the Klan. In 1982, Clayton began her long standing and impressive career with Turner Broadcasting System (TBS). At TBS, she assumed many roles throughout the years, including producing documentaries, hosting a public affairs program entitled Open Upand serving as director and vice-president of public affairs in the early 1980s. Ted Turner, founder of TBS, promoted Clayton to assistant corporate vice-president for urban affairs in 1988. In 1993, Clayton created the Trumpet Awards for Turner Broadcasting to honor African American achievements. The program is seen in over 185 countries.

As Governor of Georgia, former President Jimmy Carter appointed Clayton to the State Motion Picture and Television Commission. She is a member of the Academy for Television Arts and Sciences, the National Urban League, among other civic and professional organizations. Clayton is also a board member of the Martin Luther King, Jr. Center for Nonviolent Social Change and served as chairman of the Atlanta University Board of Trustees. The recipient of numerous accolades, Clayton received the Leadership and Dedication to Civil Rights Award and the Drum Major for Justice Award from SCLC in 2004. In her honor, the Atlanta Chapter of the Association of Black Journalists established the Xernona Clayton Scholarship. Clayton’s autobiography, I’ve Been Marching All the Time was published in 1991.

Xernona Clayton was interviewed by The HistoryMakers on June 22, 2005.

See how Xernona Clayton is related to other HistoryMakers
Donate Now
Click Here To Explore The Archive Today!