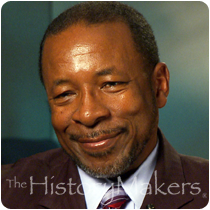 See how Woodrow Whitlow, Jr. is related to other HistoryMakers

Aerospace engineer and federal government administrator Woodrow Whitlow, Jr. was born on December 13, 1952 in Inkster, Michigan. A quick-learner, he excelled at math and science. Whitlow aspired to be a chemist until space missions in the 1960s captured his imagination, changing his career goal to astronaut. Whitlow received his B.S., M.S. and Ph.D. degrees in Aeronautics and Astronautics from the Massachusetts Institute of Technology in 1974, 1975 and 1979, respectively.

Whitlow's long career with the National Aeronautics and Space Administration (NASA) began in 1979, when he was hired as a research scientist at the NASA Langley Research Center in Hampton, Virginia. At Langley, he specialized in fluid dynamics, aerodynamics, and aeroelasticity. He rose quickly to become a senior research scientist and headed various specialty branches in astrophysics and aeronautics. In 1994, Whitlow became the Director of the Critical Technologies Division in the Office of Aeronautics at NASA Headquarters in Washington, D.C. He then moved to the NASA John H. Glenn Research Center at Lewis Field in Cleveland, Ohio in 1998, where he served as the Director of Research and Technology, among other positions. Whitlow was made Deputy Director of the NASA John F. Kennedy Space Center in 2003 and oversaw launch-related services and activities until 2005 when he was appointed to Director of the NASA Glenn Research Center. In 2010, NASA Administrator Charles Bolden named Whitlow the Associate Administrator for the Mission Support Directorate at NASA Headquarters. He retired in August of 2013 and later became Executive in Residence at the Cleveland State University Washkewicz College of Engineering.

Throughout his career, Whitlow has written over forty technical papers, most in the areas of unsteady transonic flow, aeroelasticity and propulsion. His awards include NASA’s Distinguished Service Honor Medal—the Agency’s highest honor; the Presidential Rank of Distinguished Executive—the highest award for federal executives; Presidential Rank of Meritorious Executive; U.S. Black Engineer of the Year in Government; the NASA Exceptional Service Honor Medal; the NASA Equal Opportunity Honor Medal; the (British) Institution of Mechanical Engineers William Sweet Smith Prize; the Minorities in Research Science Scientist-of-the-Year Award; and the National Society of Black Engineers Distinguished Engineer of the Year Award. The American Institute of Aeronautics and Astronautics elected him as a Fellow in 2010. He also holds an honorary doctor of engineering degree from Cranfield University.

Woodrow Whitlow, Jr. was interviewed by The HistoryMakers on May 3, 2012.

See how Woodrow Whitlow, Jr. is related to other HistoryMakers
Click Here To Explore The Archive Today!