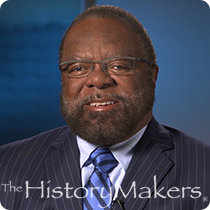 Favorite Color:
Blue
Favorite Food:
Fried corn
Favorite Time of Year:
Spring
Favorite Vacation Spot:
Maui
Favorite Quote:
If you ever see a turtle on a stump, they didn't get there by themself.

Favorite Color:
Blue
Favorite Food:
Fried corn
Favorite Time of Year:
Spring
Favorite Vacation Spot:
Maui
Favorite Quote:
If you ever see a turtle on a stump, they didn't get there by themself.

See how Winston Pittman is related to other HistoryMakers

From 1972 until 1975, Pittman worked as a hub manager for the United Parcel Service in Jackson, Mississippi. He then sought a career in the automotive industry and became a car salesman at Capital Dodge in 1975. Pittman quickly rose through the ranks of the company and worked as a used car manager, a new car manager, and, in 1981, a finance and insurance manager. In 1983, he was promoted to the position of general manager of Capital Dodge. Then, after completing the Chrysler’s dealer development program, Pittman purchased his first dealership in 1988. He purchased Cardinal Dodge, Inc. in Louisville, Kentucky and founded Pittman Enterprises, where he served as president and chief executive officer. Pittman Enterprises grew to include dealerships in Kentucky, Ohio, Georgia, and South Carolina.

Pittman was named Black Enterprise’s Dealer of the Year in 2002 and, from 1994, was consistently listed on the magazine’s “Auto Dealer 100” list. Pittman also received a Lifetime Achievement Award from the National Association of Minority Automobile Dealers in 2006, was named a legendary and exemplary leader by the African Methodist Episcopal Church in 2010, and was the recipient of the Isaac Murphy Businessman of the Year Award in 2013.

Pittman served as president of the Toyota/Lexus Minority Dealers Association and as chairman for the National Association of Minority Automotive Dealers. He was also a member of the Dodge National Dealer Council, the Lexus National Dealer Council, and the DaimlerChrysler Minority Dealers Association. Pittman volunteered his time as a board member of Fifth Third Bank, the University of Louisville’s Board of Overseers, the Lake Forest Country Club, Duquesne University Boy Scouts of America, and Quinn Chapel A.M.E. Church.

Winston Pittman was interviewed by The HistoryMakers on August 14, 2017.

See how Winston Pittman is related to other HistoryMakers