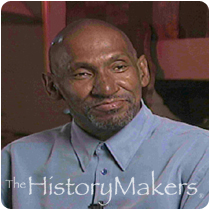 Favorite Color:
Blue
Favorite Food:
Greens (Mustard)
Favorite Time of Year:
Birthday
Favorite Vacation Spot:
Hawaii
Favorite Quote:
Do What You Can From Where You Are.

Favorite Color:
Blue
Favorite Food:
Greens (Mustard)
Favorite Time of Year:
Birthday
Favorite Vacation Spot:
Hawaii
Favorite Quote:
Do What You Can From Where You Are.

See how Willis Edwards is related to other HistoryMakers

Edwards was a part of the campaign team for Senator Robert F. Kennedy. He was by Kennedy’s side when he was assassinated in 1968. Edwards was drafted into the Vietnam War, where he was awarded a bronze star. In 1970, after returning from Vietnam, Edwards became the head of the California branch of the National Student Lobby. Thomas Bradley, the mayor of Los Angeles, California, appointed Edwards to the city’s Social Service Commission in 1973. Edwards attended the Democratic National Convention, where he served on the delegate credentials committee and led the Pledge of Allegiance. Despite being endorsed by Thomas Bradley and Rev. Jesse L. Jackson., Edwards unsuccessfully ran for the California General Assembly. In 1982, Edwards was elected president of the Beverly Hills/Hollywood Branch of the NAACP. As a producer, Edwards persuaded NBC president Brandon Tartikoff to nationally televise the NAACP Image Awards show. Edwards also coordinated Nelson Mandela’s visit to Los Angeles in 1992.

After being diagnosed with AIDS, Edwards briefly retreated to private life; he came out of seclusion to help civil rights legend Rosa Parks gain public recognition by attending the 1998 Oscars, sitting next to Hillary Clinton at Bill Clinton’s 1999 State of the Union address and meeting with Pope John Paul II. After these events, Rosa Parks received the Congressional Gold Medal. In 2000, Edwards also used his influence to raise over $1 million for Parks. He later collaborated with U.S. Congresswoman Diane Watson to raise money for her successful congressional campaign. Edwards also served as the California representative to the National Board of the NAACP and was a member of the NAACP’s HIV/AIDS subcommittee.

Willis Edwards was interviewed by The HistoryMakers on March 28, 2005.

See how Willis Edwards is related to other HistoryMakers
Click Here To Explore The Archive Today!