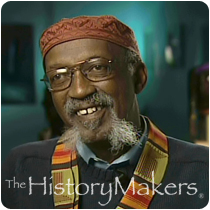 See how Willis Bing Davis is related to other HistoryMakers

Returning to DePauw University in 1970, Davis served as assistant dean of art and coordinator of Black Studies – as the only black faculty member. In 1973, Davis attended his first meeting of the National Conference of Artists (NCA) and made his first trip to Africa (Ghana). Davis was appointed assistant dean of the graduate school and associate professor of art at Miami University in 1976. That same year, Davis held his first one man show at the Studio Museum of Harlem. In 1978, Davis was invited to chair the Art Department and to become director of the new Paul Robeson Cultural and Performing Arts Center by Dr. Arthur E. Thomas of Central State University in Wilberforce, Ohio. Davis, who served on Central State University’s faculty for twenty years, also was a visiting scholar at the University of Dayton and an artist in residence at Wright State University.

Davis has an illustrious record as an artist and curator including exhibitions at the American Craft Museum, the Renwick Gallery, Maryland Institute College of Art and Design, Savannah College of Art and Design, Anacotia Museum, National Museum of Art of Senegal, West Africa, United States Embassy Accra, Ghana, and Museum fur Angewandte Kunst in Frankfort, Germany. Davis was visiting artist-lecturer for Panafest 94 in Accra, Ghana. In 1997, Davis received the Ohio Art Educator of the Year Award. He received the 1999 Global Youth Peace and Tolerance Award and the 2001 Ohioan Pegasus Award. Davis is president of the board of directors of the National Conference of Artists. Davis also established EbonNia Gallery in the developing Wright/Dunbar neighborhood of Dayton’s West Side.

A hometown cultural hero, Davis has a grown daughter and lives in Dayton with his wife, Audrey.

See how Willis Bing Davis is related to other HistoryMakers
Click Here To Explore The Archive Today!