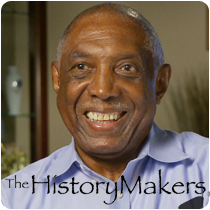 See how Willie Taylor is related to other HistoryMakers
Donate Now

Vice President of Operations, Willie J. Taylor was born September 2, 1932 in Centerville, Mississippi. His parents were Tena and Lois Taylor and he is the youngest of three children. In 1946, Taylor graduated from Forestville Elementary School in Chicago, Illinois and in 1950; he graduated from Dunbar Vocational High School in Chicago, Illinois. At the age of twenty, Taylor worked as a clerk for the United States Postal Office before joining the United States Army Signal Corp.

Post World War II, there was technology growth and Cold War inspired emphasis on cutting edge research and development, Taylor took a job as a research assistant for the Illinois Institute of Technology’s Research Institute. In 1966, Taylor joined Sonicraft Inc. as Vice President of Operations. In 1982, Sonicraft Inc. signed a manufacturing contract with the U.S. Air force that resulted in a two hundred and sixty-eight million dollar deal for the company. The contract was expected to last until 1989; making it the largest single series of contracts the government has ever awarded a minority owned business. Taylor was responsible for overseeing production and installation of equipment to automate radio communications from control tower to plane, including self-diagnostic electronic systems that are supposed to lower maintenance costs in FAA facilities. He also, produced a remote control mechanism for airport lighting systems; power sources so that they can be regulated from control towers and develop equipment for a new visual plane approach system.

Taylor has served as Trustee for Northeastern Illinois University and the Board of Governors Universities. In 1996, Taylor retired after serving thirty-years as the Vice President of Operations at Sonicraft Inc. He currently resides in Bryan, Texas with his wife Ollie Taylor. They have three children together, Theresa Doughty, Louis Taylor, Jr. and Valerie Taylor.

See how Willie Taylor is related to other HistoryMakers
Donate Now
Click Here To Explore The Archive Today!