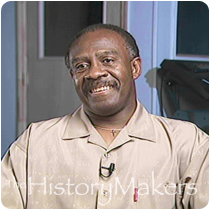 Favorite Color:
Green
Favorite Food:
Soul Food
Favorite Time of Year:
Christmas
Favorite Vacation Spot:
Gulf Shores, Alabama
Favorite Quote:
If He Hung Out There, We Ought To Be Able To At Least Hang In There.

Favorite Color:
Green
Favorite Food:
Soul Food
Favorite Time of Year:
Christmas
Favorite Vacation Spot:
Gulf Shores, Alabama
Favorite Quote:
If He Hung Out There, We Ought To Be Able To At Least Hang In There.

See how Willie Kitchens is related to other HistoryMakers
Donate Now

Born on January 6, 1956, to a musical family in Chattanooga, Tennessee, Willie David Kitchens, Jr., fell in love with music at an early age. At age seven, Kitchens began singing at community churches with his sisters and his father, a guitarist with the gospel group Five Sons of Calvary. Kitchens soon became a member of the Rosebud Choir at his family’s church, Greater Friendship Missionary Baptist. Willie Kitchens, Sr. taught his son to play guitar when he was ten, and at sixteen the younger Kitchens joined the Five Sons of Calvary as bass guitarist and background vocalist.

With the Five Sons, Kitchens performed with groups including the Swan Silvertones, the Brooklyn All-Stars, and the Jackson Southernaires. Diversifying his repertoire, Kitchens joined the funk band at Howard High School as lead guitarist and lead vocalist while continuing to perform gospel at church and with the Five Sons. After graduating high school, Kitchens attended the University of Tennessee at Chattanooga.

At age twenty-four, Kitchens began to concentrate on gospel performance. Over the years, he taught himself to play the harmonica, piano, and electric keyboards. Kitchens performed and ministered everywhere from “Bobby Jones Gospel” to colleges, to prisons.

In December 1999, Kitchens joined Samuel Gooden, Fred Cash, and Vandy Hampton in the Impressions, the Rock and Roll Hall of Fame rhythm and blues group that launched Curtis Mayfield’s career. In 2001, the Impressions toured with Eric Clapton.

Kitchens served as lead vocalist for the group—the role that Mayfield filled from 1963-1970. Kitchens, a long-term resident of Chattanooga, Tennessee, left the Impressions in 2002 and went on to work for the Bethlehem Center, where he served as the executive director of the Bethlehem Center Mass Choir and minister of music to the Bethlehem-Wiley United Methodist Church.

Willie Kitchens was interviewed by The HistoryMakers on July 27, 2005.

See how Willie Kitchens is related to other HistoryMakers
Donate Now
Click Here To Explore The Archive Today!