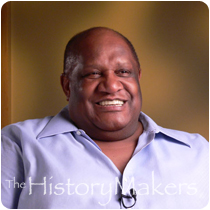 Broadcast executive and football player Willie D. Davis was born on July 24, 1934, in Lisbon, Louisiana to Nodie Bell and David Davis. Recruited to Grambling College (now Grambling State University) by football coach Eddie Robinson, Davis captained the football team and was a student on the dean’s list for two years. In 1956, he graduated from Grambling with his B.S. degree in math and industrial arts.

Davis was drafted by the Cleveland Browns in the seventeenth round of the 1956 National Football League Draft. However, that same year, Davis was also drafted into the U.S. Army and was unable to begin his NFL career until 1958. After two years with the Browns, Davis was traded to the Green Bay Packers. For ten seasons, Davis played 138 consecutive regular season games and was a member of all five of Vince Lombardi’s NFL title-winning teams, playing in Super Bowls I and II. In his career with the Green Bay Packers, Davis recovered twenty-one fumbles, setting a team record, never missing any of the 162 games in his twelve-year tenure. Davis was awarded the Associated Press’ All-Pro honors in 1962 and from 1964 to 1967. During the last two years of his football career, Davis studied at the University of Chicago, earning his M.B.A degree in 1968. The following year, the Packers honored Davis’ retirement with Willie Davis Day. That same year, Davis purchased the West Coast Beverage Company and served as its president for eighteen years, while also working as a color commentator on the NFL telecasts for NBC in the early 1970s. Since 1976, Davis has been the president and chief executive officer of All Pro Broadcasting, Inc., a Los Angeles broadcasting company which owns radio stations in the Midwest and Southern California. In 1981, he was inducted into the Pro Football Hall of Fame. Davis served as the director of the 1984 Olympics Committee in Los Angeles in 1984. That same year, President Reagan appointed him to the President’s Commission on the Executive Exchange.

Davis has served on the boards of the Sara Lee Corporation, the National Association of Broadcasters, Dow Chemical Company, Metro-Goldwyn-Mayer, Johnson Controls, MGM Mirage, Manpower, Fidelity National Financial, Wisconsin Energy, Strong Management Fund, Mattel Toys, Schlitz Brewing Company, Fireman’s Fund Insurance, Bassett Furniture, Alliance Bank, the Green Bay Packers, the Kauffman Foundation, Occidental College and K-Mart. Davis is also an Emeritus Trustee for the University of Chicago and a Trustee at Marquette University. In 2001, Davis co-chaired and founded the Vince Lombardi Titletown Legends, a charitable organization created to assist various charities throughout Wisconsin. Davis was named the Walter Camp Man of the Year, was ranked 69th on The Sporting News’ list of the 100 Greatest Football Players and was given the Career Achievement Award from the NFL Alumni. Davis and his wife Ann have a son, Duane, and a daughter, Lori.

Willie D. Davis was interviewed by The HistoryMakers on July 9, 2007.