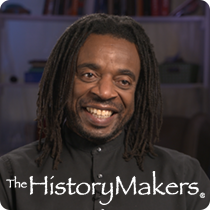 Favorite Color:
Orange and Green
Favorite Food:
Sunflower Seeds
Favorite Time of Year:
Winter
Favorite Vacation Spot:
My Mind.
Favorite Quote:
It Doesn't Matter When You Get On The Bus, Just When You Get Off.

Favorite Color:
Orange and Green
Favorite Food:
Sunflower Seeds
Favorite Time of Year:
Winter
Favorite Vacation Spot:
My Mind.
Favorite Quote:
It Doesn't Matter When You Get On The Bus, Just When You Get Off.

See how Willie Cole is related to other HistoryMakers

Sculptor Willie Cole was born on January 3, 1955 in Somerville, New Jersey. In 1958, he moved to Newark, New Jersey, where he took art classes at the Newark Museum, and later attended the Arts High School of Newark. Cole went on to receive his B.F.A degree from the School of Visual Arts in New York City, New York. He continued his art education by attending classes at the Art Students League of New York.

After graduation, Cole worked as a freelance artist and graphic designer. In 1988, he completed his first major art installation, Ten Thousand Mandellas. The installation led to his first major gallery show, which took place at Franklin Furnace Gallery in New York City, New York in 1989. The following year, Cole served as the artist-in-residence at the Studio Museum in Harlem, New York. In 1997, Cole created the piece, Stowage, garnering him a solo exhibition at the Museum of Modern Art in New York. Cole had a number of solo exhibition shows that followed, including a show at the Bronx Museum of the Arts in 2001. In 2010, an exhibition show of his work took place at the James Gallery of the Graduate Center of the City University of New York. In 2013, Complex Conversations: Willie Cole Sculptures and Wall Work opened at Western Michigan University in Kalamazoo, Michigan, before the exhibition began travelling across the country.

Cole has received many awards for his work as an artist, including the Penny McCall Foundation Grant in 1991, the Louis Comfort Tiffany Foundation Grant in 1995, the Joan Mitchell Foundation Award in 1996, the David C. Driskell Prize in 2006, and Timehri Award for Leadership in the Arts in 2009. In 2004, Cole received the Lamar Dodd Fellowship at the University of Georgia in Athens, Georgia. Cole served as an artist-in-residence at several institutions, including the Pilchuck Glass School in Seattle, Washington, the Contemporary in Baltimore, Maryland, the Capp Street Project in San Francisco, California, and the John Michael Kohler Arts Center in Sheboygan, Wisconsin.

Cole has one son.

Willie Cole was interviewed by The HistoryMakers on February 3, 2017.

See how Willie Cole is related to other HistoryMakers
Click Here To Explore The Archive Today!