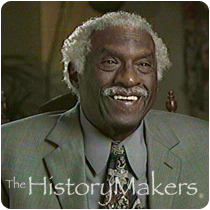 Bass soloist and educator Willie Brown, Jr. was born on August 17, 1930 in New Orleans, Louisiana to Odessa Jackson Brown and Willie Chester Brown, both church soloists. He sang his first solo, Heaven’s Radio in kindergarten. Brown attended Sylvania F. Williams School in New Orleans and spent some of his elementary years in Redondo Beach and Los Angeles, California. Attending Nelson Junior High School in New Orleans, Brown performed as a church soloist and in school operettas. He formed the group, Willie Brown and the Boys, before graduating from Booker T. Washington High School in 1949. His education at Xavier University was interrupted by service in the United States Army in 1953, but he returned to graduate with a B.A. degree in music education in 1957. Brown went on to earn a Masters degree in musical performance from Governors State University in Illinois and later a Ph.D. in music from Birmingham, Alabama’s Faith College. At Xavier University’s Opera Workshop, Brown performed the title role in the opera Riggoletto, “Figaro” in The Marriage of Figaro and “Escamillo” in Carmen.

Moving to Chicago in 1957, Brown served as a Chicago public school teacher, while building a reputation as a church and classical soloist. In the early 1960’s, he gained national exposure as a guest soloist on NBC television’s Dave Garroway Show. In 1967, he was invited as special guest of Dr. Martin Luther King, Jr. to perform for the SCLC Convention in Atlanta, Georgia. Brown performed with the black McLin Opera Company and the Light Opera Company and performed over two thousand times as a professional with Chicago’s Lyric Opera Company where he was the only full time African American artist. His Lyric Opera credits include solos as “Escamillo” in Carmen and as the priest in Aida. Brown was also a soloist in Tales of Hoffmann, Pagliacci and Cavallieria Rusticana. Brown often performed Handel’s Messiah, Requiem, Seven Last Words of Christ, St. Paul by Mendelssohn and Strabat Mater as an oratorio bass soloist. His musical repertoire included operatic arias in Italian, French and German and oratorio arias in Latin. Brown also performed cantatas, English, Italian and German folk songs, American show songs, spirituals, gospels, hymns and popular songs. Brown’s concert credits included Notre Dame University, International Parliament of Religion, and the Chicago Gospel Fest. The Bravo Chapter of the Lyric Opera, the Chicago Board of Education Music Department, and the Chicago Board of Administrative Affairs invited Brown as a special guest performer.

Brown was the winner of numerous awards for his solos including the “Best Male Singer” from the R. Nathaniel Dett Scholarship Award, the B Sharp Best Singer Scholarship and the 1996 James P. Lyke African American Male Image Award. He was the director of the Angels Choir of Chicago’s Ebenezer Baptist Church.