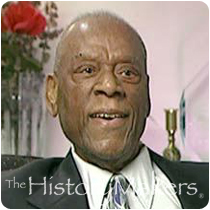 See how William Warfield is related to other HistoryMakers

Opera singer and educator William Caesar Warfield was born on January 22, 1920 in West Helena, Arkansas to Robert and Bertha McCamery Warfield. Warfield first developed vocal skills by singing in the choir of his father’s Baptist church. During his childhood, the Warfield family moved to Rochester, New York, where he took formal voice lessons. In 1938, during his senior year at Washington High School, Warfield won the District Award for the National Music Educators’ League vocal competition, which included a scholarship to a music school. Warfield went on to attend the Eastman School of Music at the University of Rochester, where he received his B.A. degree in music studies in 1942.

After a brief period of service in the U.S. Army during World War II, Warfield returned to New York and earned a part in the Broadway show Call Me Mister. He then was cast in two other productions, 1948’s Set My People Free and 1950’s Regina. In 1950, Warfield was also cast in the film adaptation of Show Boat and made his New York City Town Hall debut.

In 1952, Warfield was chosen to star as Porgy in a revival of the musical Porgy and Bess, opposite opera soprano legend Leontyne Price. They toured throughout the United States and Europe and later married. Together, they went on to perform several concerts, including a joint recital with the Philadelphia Orchestra in 1956. Throughout the remainder of the 1950s, Warfield toured with the U.S. Department of State throughout Africa, Europe, Asia and the Near East. In the 1960s, he performed in a series of European shows, including venues in Greece, Switzerland, and Austria. Warfield also began to teach music in the 1970s, first at the University of Illinois at Urbana-Champaign from 1974 to 1990; at the University of Texas at San Antonio in 1993 and 1994; and at Northwestern University from 1994 until 2002.

On March 24, 1975, the twenty-fifth anniversary of Warfield's Town Hall debut was commemorated by a recital at the Duke Ellington Center in New York City's Carnegie Hall. In 1984, he won a Grammy Award in the spoken word category for his narration of Aaron Copland's Lincoln Portrait. In addition, Warfield was a past president of the National Association of Negro Musicians and a board member of the Schiller Institute. He died on August 25, 2002.

See how William Warfield is related to other HistoryMakers
Click Here To Explore The Archive Today!