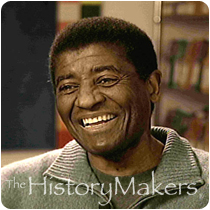 See how William T. Williams is related to other HistoryMakers

In 1956, Williams met famed artist Jacob Lawrence, an encounter that helped him believe that he could be a professional artist. That same year, Williams was admitted to the High School for Industrial Arts in Manhattan, where he often frequented the Museum of Modern Art and the Metropolitan Museum of Art. After graduating from high school as a member of the National Honor Society, Williams entered New York City Community College in 1960, and graduated two years later with his A.A.S. degree.

In 1962, Williams was admitted into Pratt Institute. In the summer of 1965, Williams attended a summer art program at Skowhegan School of Painting and Sculpture in Skowhegan, Maine. Williams graduated with honors from Pratt Institute with his B.F.A. degree in 1966, then attended Yale University School of Art and Architecture, where he earned his M.F.A. degree in 1968. Williams returned to New York City, and with the help of his parents, rented a Soho loft that remained his home and studio throughout his career. Soon after, Williams married Patricia De Weese, with whom he had two children: Aaron and Nila.

Williams’s first exhibit was a part of a group exhibition called X to the Fourth Power; it was held at the Studio Museum in Harlem, New York in 1969, a place he would return to for exhibitions numerous times. In 1971, Williams had his first show at the Reese Paley Art Gallery, where he sold out his entire exhibit. Throughout the 1970s, Williams’s work would be exhibited at a number of venues, including the Museum of Modern Art in New York, the Whitney Museum in New York, the American Embassy in Moscow, and the Fondation Maeght in France.

In the late 1970s, Williams took his first trip to Africa, which influenced the style of his work throughout the 1980s. In 1984, Williams became a visiting professor at Virginia Commonwealth University, and the following year held a solo exhibition at the Southeastern Center for Contemporary Art in Winston-Salem, North Carolina. Williams became the first black artist included in H.W. Janson’s History of Art textbook in 1986, and in 1987, was awarded a Guggenheim Fellowship. Williams continued to work throughout the 1990s, and his work was included in the To Conserve a Legacy: American Art from Historically Black Colleges and Universities touring exhibit in 1999. In 2006, Williams was awarded the prestigious North Carolina Award, the highest civilian honor the state can bequeath.

See how William T. Williams is related to other HistoryMakers
Click Here To Explore The Archive Today!