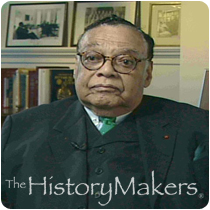 See how William T. Coleman, Jr. is related to other HistoryMakers
Donate Now

William Thaddeus Coleman, Jr., was the first African American to clerk for a U.S. Supreme Court justice, served as secretary of transportation under the Ford administration, and helped try numerous important civil rights cases. He was born on July 7, 1920, in the Germantown district of Philadelphia, Pennsylvania, to William Thaddeus and Laura Beatrice Mason Coleman. Coleman’s father was a director of the Germantown boys club for forty years, and as a result, Coleman met many African American notables at an early age, including W.E.B. DuBois. After attending an all-black segregated elementary school, Coleman attended the mostly-white Germantown High School. After high school, Coleman attended the University of Pennsylvania, where he graduated summa cum laude with his B.A. degree in 1941. Eager to work in law ever since childhood, Coleman attended Harvard Law School later that year. In 1943, he joined the U.S. Army Air Corps. As defense counsel for eighteen courts-martial, he won acquittals for sixteen. He returned to Harvard Law School after the war.

In 1946, Coleman received his L.L.B. degree magna cum laude from Harvard Law School, after becoming the third African American man to serve on the board of editors of the Harvard Law Review. He was a Langdell fellow, and was therefore permitted to stay at Harvard Law School to study for an extra year. In 1947, he was admitted to the bar and obtained a job working as a law clerk with Judge Herbert F. Goodrich of the Third Circuit’s U.S. Court of Appeals. The following year, he became U.S. Supreme Court Associate Justice Felix Frankfurter’s law clerk, and as such, he was the first African American to clerk for the U.S. Supreme Court.

In 1949, Coleman joined Paul, Weiss, Rifkind, Wharton, and Garrison, a noted New York law firm, where he met Thurgood Marshall and worked pro bono to assist Marshall with NAACP cases. In 1952, Coleman became the first African American to join an all-white firm, and in 1966, he became partner at Dilworth, Paxon, Kalish, Levy and Coleman. Coleman worked in the Civil Rights Movement throughout the 1950s, including five cases for the NAACP Legal Defense Fund (LDF) cases that led directly to the Brown v. Board of Education decision. He also served as co-counsel for McLaughlin v. Florida, a case that decided the constitutionality of interracial marriages.

In 1959, President Eisenhower convinced Coleman to work on the President’s commission on employment policy; Coleman continued to work in presidential commissions for Kennedy, Johnson and Nixon, including the Warren commission’s investigation of Kennedy’s assassination. In 1971, Coleman was elected president of the NAACP-LDF. In 1975, Coleman was appointed President Gerald Ford's Secretary of Transportation, becoming only the second African American to hold a cabinet-level position. During his tenure, he created the first Statement of National Transportation Policy in U.S. history. When Carter became president in 1976, Coleman returned to the private sector, becoming a senior partner of the Los Angeles-based O’Melveny & Myers law firm. In 1995, Coleman was awarded the Presidential Medal of Freedom for his contributions to the legal profession and to society.

See how William T. Coleman, Jr. is related to other HistoryMakers
Donate Now
Click Here To Explore The Archive Today!