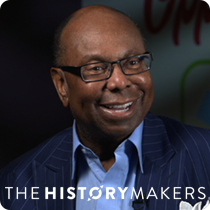 See how William Pickard is related to other HistoryMakers
Donate Now

In 1971, Pickard purchased his first McDonald’s franchise in the Detroit area, and then expanded to own several franchises. In 1982, Pickard was appointed as the first Chairman of the African Development Foundation by President Ronald Reagan. In 1984, Pickard purchased Regal Plastics Company, a company that specialized in producing plastic moldings that were used in automobile parts. In 1987, Bearwood Management Company, Inc. was founded and Pickard became its president. In 1990, he was appointed to the National Advisory Committee on Trade Policy by President George H.W. Bush. The following year, he was appointed to the Federal Home Loan Bank Board of the Indianapolis Bank. In 1998, Pickard founded both Grupo Antolin Primera Automotive Systems and ARD Logistics. The following year, he helped found Vitec LLC. In addition, he became an investor with MGM Grand, Inc. for the construction of a casino in Detroit. In 1999, Pickard founded Global Automotive Alliance, a holding company to several automotive parts manufacturers, and served as its chairman. In 2003, he was part of a group that funded the media company, Real Times Media, LLC and purchased the Chicago Defender and other African American owned newspapers. In 2004, Pickard became the director of Asset Acceptance Capitol Corporation.

In 1980, Pickard was awarded the Distinguished Alumni Award by Western Michigan University. In 2001, he was named “Michiganian of the Year” by Detroit News; and, in 2016, he was appointed by Michigan Governor Rick Snyder to serve as a trustee on the Western Michigan Board of Trustees. In 2017, he published his book, Millionaire Moves: Seven Proven Principles of Entrepreneurship. In the same year, Western Michigan University named a residence hall in his honor, along with Ronald Hall and Dennis Archer.

William Pickard was interviewed by The HistoryMakers on October 20, 2017.

See how William Pickard is related to other HistoryMakers
Donate Now