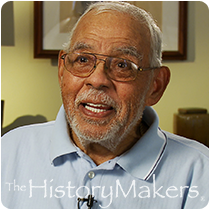 See how William Pajaud is related to other HistoryMakers

Artist and insurance executive William Etienne Pajaud, Jr. was born on August 3, 1925 in New Orleans, Louisiana. His father, William Etienne Pajaud, Sr., was a trumpet player and bandleader; his mother, Audrey DuCongé, a college professor of social work. Pajaud and his mother moved around in his youth, from Nashville to Chattanooga, Tennessee, and then to Tyler, Texas. He returned to New Orleans to attend Xavier University, where he graduated with his B.F.A. degree in 1946.

Upon graduation, Pajaud moved to Chicago, Illinois and worked as a sign artist and a freelance designer. In 1949, he relocated to Los Angeles, California, where he enrolled at the Chouinard Art Institute and earned a certificate in advertising and design while working as a postal clerk. Pajaud was the first African American to be admitted to Chouinard’s day school and to complete a degree.

In 1957, Pajaud was hired at the Golden State Mutual Life Insurance Company in Los Angeles, California, where he later became vice president of public relations and advertising. At Golden State, he developed and was curator of the company’s African American art collection, which was considered one of the most important in the world. In his free time, Pajaud painted and exhibited his own artwork in Los Angeles at places such as the Heritage Art Gallery, black-owned Brockman Gallery, and later at the M. Hanks Gallery in Santa Monica, California. He retired from the Golden State Mutual Life Insurance Company in 1987, but continued to paint and exhibit his art widely in museums and galleries throughout the United States.

Pajaud was a member of the Society of Graphic Designers, the Los Angeles County Art Association, and the National Watercolor Society, of which he served as president from 1974 to 1975. His honors include the 1969 PRSA Art Exhibition Award of Merit, the 1971 National Association of Media Women Communications Award, the 1975 University of the Pacific Honor, the 1978 Paul Robeson Special Award for Contribution to the Arts, the 1981 PR News Gold Key Award, the 1981 League of Allied Arts Corporation Artists of Achievement Award, and the 2004 Samella Award.

William Pajaud was interviewed by The HistoryMakers on August 1, 2014.

See how William Pajaud is related to other HistoryMakers