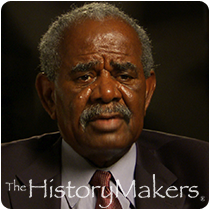 See how William Moore is related to other HistoryMakers

Photojournalist William Moore was born on May 23, 1933. He graduated from Oakland Technical High School, and went on to receive his B.S. degree in photography from Laney College in Oakland, California.

Upon graduation, Moore worked as a freelance photographer for various black-owned newspapers, magazines and radio stations. Then, in 1968, Moore was hired as a television news cameraman for KTVU in Oakland, California, making him the first full-time African American news cameraman in commercial television in the State of California. He was hired alongside Dennis Richmond, one of the first African Americans to become chief anchor of a major-market TV newscast, as a result of a federal court mandate. In 1969, while working for KTVU, Moore was hired by the Associated Press as a freelance photographer. He was eventually promoted to chief photographer at KTVU.

As a cameraman, Moore covered such events as the Loma Prieta earthquake, the Oakland Hills Fire, the O.J. Simpson murder trial, and the murders of San Francisco Mayor George Moscone and San Francisco Supervisor Harvey Milk. He also filmed anti-war and civil rights movements and demonstrations of the late 1960s and 1970s, as well as the Nicaraguan earthquake of 1988. In addition, Moore traveled and worked internationally, filming in many countries including Haiti, Italy, Brazil, Kenya, and South Africa. He retired from KTVU in 1996, and, in 2003, Moore was hired as an adjunct professor at Ohlone College in Fremont, California, where he teaches digital video in the college’s broadcasting and television department.

Moore has been a volunteer for Seven Tepees, an afterschool mentoring and enrichment program for middle and high school students in San Francisco. He was also a board member of the Committee on the Shelterless, a program that assists the homeless in Sonoma County. Moore lives with his wife, Belva Davis, in San Francisco. They have two children: Steven Davis, owner of a catering business, and Darolyn Davis, owner of a public relations firm.

William Moore was interviewed by The HistoryMakers on November 7, 2013.

See how William Moore is related to other HistoryMakers
Click Here To Explore The Archive Today!