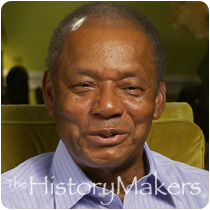 See how William Lucy is related to other HistoryMakers

William Lucy is one of the most prominent labor leaders in recent U.S. history. He has been secretary-treasurer of American Federation of State County and Municipal Employees (AFSCME) for the past thirty-five years, and was reelected in July 2008 to another 4-year term. As secretary-treasurer, Lucy holds the second highest ranking position within AFSCME, making him the highest ranking African American in the labor movement.

William Lucy was born on November 26, 1933 in Memphis, Tennessee. Lucy grew up in Richmond, California where his parents, Susie and Joseph Lucy, moved when he was a young boy. He studied civil engineering at the University of California at Berkeley in the early 1950s. Lucy then took a position as an assistant materials and research engineer for Contra Costa County, California. It was in this position that he first got involved in labor organizing. Lucy held that position for thirteen years until 1966. He became a member of AFSCME Local 1675 in 1956 at the age of twenty-three and then was elected its president in 1965 at the age of thirty-two. In 1966, Lucy left his job in civil engineering at Contra Costa County to work full-time for AFSCME’s national office in Washington, D.C., as the associate director of the legislation and community affairs departments.

During the 1960s, AFSCME chapters around the country organized marches and strikes to secure better wages and working conditions for its members. These actions were often met with a violent police response. During this period, many AFSCME members and leaders were beaten, tear-gassed, and jailed. Lucy was jailed by police several times in his capacity as union leader and activist. In 1968, at the age of thirty-five, Lucy worked on the historic Memphis sanitation workers’ strike. He coined the famous slogan, “I Am A Man!” that became the rallying call for the Memphis strikers. In the tumultuous aftermath of Dr. Martin Luther King, Jr.’s assassination during the Memphis sanitation workers’ strike, Lucy helped maintain the labor-civil rights-community coalition that sealed the workers’ eventual victory and became the model used throughout the nation.

In 1972, Lucy co-founded the Coalition of Black Trade Unionists (CBTU) to ensure African Americans a voice in labor. In 1984, Lucy joined the Free South Africa Movement, a grassroots campaign that sparked widespread opposition to apartheid in South Africa. In 1994, Lucy became the president of Public Services International (PSI), the world’s largest union federation. Lucy was the first African American to hold this position, which coordinates the efforts of ten million members from over 100 nations. Ebony magazine frequently cites Lucy as one of “The 100 most Influential Black Americans.” Lucy has two children, Benita Marsh and Phyllis Manuel.

See how William Lucy is related to other HistoryMakers
Click Here To Explore The Archive Today!