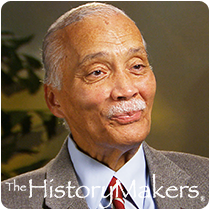 See how William Lee is related to other HistoryMakers
Donate Now

Newspaper publisher William H. Lee was born on May 29, 1936 in Austin, Texas. Williams attended Sacramento State College from 1953 to 1955, and went on to earn his A.B. degree in journalism from the University of California in 1957.

From 1970 to 1973, Lee served as secretary and as a member of the board of directors of the National Newspaper Publishers Association. He was elected as president of the West Coast Black Publishers Association 1974. He is founder and past president of the Men’s Civic League of Sacramento, co-founder of the Sacramento Area Black Caucus, and is a lifetime member of the N.A.A.C.P.

Lee received Sacramento’s Outstanding Young Man of the Year Award (1965), the Carly Murphy Plaque for community service (1994), the. The Sacramento Observer was a recipient of the Media Award from the Western Regional Conference of Elected Black Officials in (1973) and the John B. Russwurm Trophy – which is considered to be the Pulitzer Prize in African American newspaper publishing – from the National Newspaper Publishers Association (1973, 1975).

William H. Lee was interviewed by The HistoryMakers on November 5, 2013.

See how William Lee is related to other HistoryMakers
Donate Now
Click Here To Explore The Archive Today!