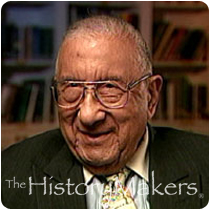 See how William Layton is related to other HistoryMakers

Historian, storyteller and retired government executive William Layton was born in Hanover, Virginia, in 1915. The son of a teacher and the superintendent of a reform school for African American boys, he graduated from Lincoln University in Pennsylvania and Fisk University in Tennessee.

Layton worked as a social worker for Nashville public schools and the Urban League in Columbus, Ohio, and Muskegon, Michigan. In 1959, he joined the staff of the Michigan Civil Rights Commission, where he served as director of education. After working for the U.S. Department of Agriculture, he was hired as the equal employment officer at the Federal Reserve Board, becoming the first African American to serve as a staff officer for the Board of Governors for the Federal Reserve. From 1977 to 1988, Layton fulfilled engagements as a consultant and public speaker.

A historian known for enlivening stories of the past with anecdotes and astute connections, Layton has published two books of essays he wrote for a column in the newsletter of his service club, The Clarke County Kiwanian, and other reflections. For more than fifty years, he has been collecting historical documents and memorabilia, mainly related to the Civil War and abolitionist movement. The National Archives duplicated 1,500 items of his renowned collection. A founding member of the board of directors of the Fort Collier Civil War Center, Layton has been credited for saving Fort Collier, an important Civil War battlefield. Layton's grandson, NFL player William Roaf, contributed to the site, which houses a museum named in his grandfather's honor. A friend of Rosa Parks, Layton visited the White House on President Bill Clinton's invitation.

Layton married his wife, Phoebe, in 1940. They had three daughters, the late Serena Layton Davis, who worked in advertising in New Jersey and Michigan; Andrée Layton Roaf, a court of appeals judge in Arkansas; and Mary Layton, a public relations professional who served as assistant U.S. postmaster general in the 1980s.

Layton was interviewed by The HistoryMakers on January 26, 2003.

See how William Layton is related to other HistoryMakers
Click Here To Explore The Archive Today!