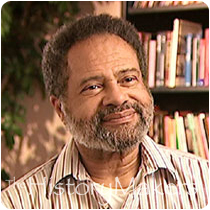 See how William King is related to other HistoryMakers
Donate Now

Scholar William King was born on February 11, 1940 and raised in Cleveland, Ohio by Daisy and Melvin King. He has enriched the minds of young people as a college professor.

King graduated from Glenville High School in 1958 and attended Kent State University, where he studied psychology and earned a B.A. in 1966. He used his skills as an educator by teaching mentally retarded children in Canton, Ohio's public schools. Simultaneously, King served as a rehabilitation counselor for the State of Ohio. In 1968, King turned to the students at Walsh College, lecturing them about sociology. He became involved in Walsh's UPWARD BOUND program. Focusing on urban studies, he earned a master's degree in 1970 from the University of Akron. King moved to Syracuse, New York and enrolled in a Ph.D. program at Syracuse University's Maxwell Graduate School of Citizenship and Public Affairs while serving as assistant professor in urban studies at Utica College. When he received his Ph.D. in 1974, he was appointed to the graduate school faculty, where he still teaches. His course offerings include the politics and ethics of social research, African American scientists and inventors, blacks in the West, W.E.B. DuBois and Afrocentric research methods.

King has served as the publications unit director for the University of Colorado-Boulder's Center for Studies of Ethnicity and Race in America and the director of its black studies program. A member of the Association for the Study of Afro-American Life and History, the National Congress of Black Faculty and the National Institute of Science, he is widely published. King, who married Carla S. King in 1999, has two adult children: Kenneth and Camron.

--How to Write Research Papers: A Guide for the Insecure. Boulder, CO: Center for Studies of Ethnicity and Race in America, 1991.

See how William King is related to other HistoryMakers
Donate Now
Click Here To Explore The Archive Today!