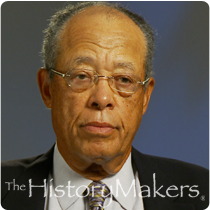 See how William Jackson is related to other HistoryMakers
Donate Now

Chemist and academic administrator William M. Jackson was born on September 24, 1936 in Birmingham, Alabama. He received his B.S. and Ph.D. degrees in chemistry from Morehouse College in 1956 and Catholic University of America, CUA in 1961, respectively. His expertise is in photochemistry, lasers chemistry, and astrochemistry.

Jackson has been a research scientist in industry at Martin Co (now Lockheed-Martin) and the government at the National Bureau of Standards (now the National Institute of Standards and Technology) and NASA’s Goddard Space Flight Center (GSFC). He has been an academician at the University of Pittsburgh (1969-1970), Howard University (1974-1985), and the University of California, Davis (UCD). He joined the faculty at UCD as a chemistry professor in 1985. He then became a distinguished professor in 1998, and chair of the chemistry department from 2000 to 2005. He was awarded millions of dollars in research and education grants and has taught and mentored under representative minority students at Howard University and UCD. Under his direction, the minority student population of the UCD chemistry graduate students increased. He continues to do research, as well as, recruiting and mentoring minority students in chemistry, even though he is officially retired.

In the field of astrochemistry, Jackson observed comets with both ground-based and satellite telescopes and used laboratory and theoretical studies to explain how the radicals observed in comets are formed. He led the team that made the first satellite (IUE) telescope cometary observation. His laboratory developed tunable dye lasers to detect and determine the properties of free radicals formed during the photodissociation of stable molecules. He continued to use lasers in the laboratory to map out the excited states of small molecules important in comets, planetary atmospheres, and the interstellar medium decompose into reactive atoms and radicals and are important in the chemistry of these astronomical bodies. Jackson published over 176 scientific papers, has a United States patent, and has edited two books.

Jackson is the recipient of many awards from universities and scientific organizations. They include the National Organization of Black Chemists and Chemical Engineers (NOBCChE) Percy Julian Award (1986), a Guggenheim Foundation Fellowship (1989), the CUA alumni award for scientific achievements (1991), the Alexander von Humboldt Senior Research Award (1996), the Morehouse College Bennie Trail Blazer award (2011) and election as a Fellow in the American Physical Society (1995), in the American Association for the Advancement of Science (2004) in, and American Chemical Society (2010). He is one of the six founders of NOBCChE; and in 1996, the Planetary Society named asteroid 1081 EE37 as (4322) Billjackson in his honor for contributions to planetary science.

William M. Jackson was interviewed by The HistoryMakers on November 6, 2012.

See how William Jackson is related to other HistoryMakers
Donate Now
Click Here To Explore The Archive Today!