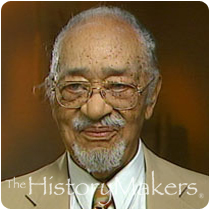 See how William Hudgins is related to other HistoryMakers

Banker William Hudgins was born on April 30, 1907, in Richmond, Virginia, and was adopted by Agnes and William Hudgins at the age of two. He attended John Pierce Academy in New York for real estate and bank management after high school. Hudgins then studied business and real estate at Columbia University, and later received an honorary L.H.D. from Shaw University in 1968.

Hudgins began his career in door-to-door sales and real estate in New York City. He and real estate rival Robert Bell formed B&H Realty Corporation and, with business soaring, formed another side-venture, Best Yet Hair Products mail order company for black women, in 1943. Best Yet Hair Products had an exclusive arrangement with China and specialized in the manufacture of human hair wigs. With the success of his business arrangements, Hudgins became the first African American in the merchant's division of the Uptown Chamber of Commerce.

Hudgins organized Carver Bank with seven other community leaders in Harlem in 1948. He served as president of Carver Bank for eighteen years before resigning to join a group that included baseball great Jackie Robinson in forming the Freedom National Bank to help meet the needs of the Harlem community by providing low-cost loans to home owners and small businesses who had difficulty obtaining loans from large banks. Hudgins was the first president of Freedom National Bank, which, after six years under Hudgin's presidency, grew to be the largest bank in the United States owned and operated by African Americans. He has served on numerous business and civic boards and has received various honors. He married his wife, Dorothy, in New York City in 1979. Hudgins passed away on August 31, 2007.

See how William Hudgins is related to other HistoryMakers
Click Here To Explore The Archive Today!