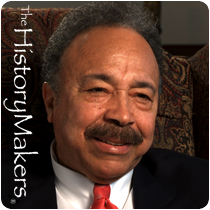 See how William Harvey is related to other HistoryMakers
Donate Now

Dr. William R. Harvey is President of Hampton University and 100% owner of the Pepsi Cola Bottling Company of Houghton, Michigan. A native of Brewton, Alabama, he is a graduate of Southern Normal High School and Talladega College. He earned his doctorate in College Administration from Harvard University in 1972. Before coming to Hampton thirty-two years ago, he held administrative posts at Harvard, Fisk, and Tuskegee universities.

Since Dr. Harvey became President in 1978, student enrollment has increased from approximately 2,700 to approximately 6,300. Seventy-six new academic programs have been introduced including PhD’s in physics, pharmacy, nursing, atmospheric and planetary science, and physical therapy. During that time, he has built 18 new buildings. Dr. Harvey initiated a university-owned commercial development consisting of a shopping center and 246 two-bedroom apartments. The Project creates jobs, provides services, has increased the number of African-American entrepreneurs, and expanded the tax base in the City of Hampton.

Dr. Harvey is married to the former Norma Baker of Martinsville, Virginia, and they have three children—Kelly Renee, William Christopher, and Leslie Denise—and three grandchildren—Taylor, Gabrielle, and Lauren.


William R. Harvey was interviewed by The HistoryMakers on April 14, 2010.

See how William Harvey is related to other HistoryMakers
Donate Now
Click Here To Explore The Archive Today!