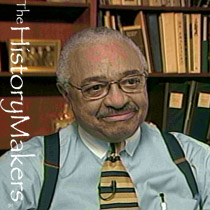 See how William E. Lowry, Jr. is related to other HistoryMakers
Donate Now

An African American business executive, William Lowry has achieved an iconic status working with the movers and shakers of Chicago. He was born in the city on February 16, 1935, to William and Camille Lowry, who were both postal workers.

Although a product of a working-class environment, Lowry's parents were encouraged by a teacher to enroll him and his brother, James, into renowned private schools in the city. He attended the University of Chicago Laboratory School for elementary school and also attended two years of high school there before transferring to Francis W. Parker and graduating in 1952.

Upon graduation, Lowry enrolled at Kenyon College in Gambier, Ohio, where he received a B.A. in 1956. After graduation, he worked at his high school alma mater, Francis Parker, as an athletic director from 1960 to 1962. In 1963, he began his long and distinguished career in Chicago business, becoming a member of the training program at the Inland Steel Company. During his early years at Inland in the 1960s, Lowry and two other African American businessmen founded the Youth Motivation Program. Bringing men and women from various employment fields to talk to Chicago public school students about career opportunities, the program has addressed more than 1 million students.

By this time, Lowry was also working on an M.S. in industrial relations from Loyola University in Chicago, which he received in 1969. It was also through his work with the Youth Motivation Program that he would be tapped to become the host of The Opportunity Line , a weekly employment program that first aired on Chicago television station WBBM in 1967. The name of the show was later changed to Objective: Jobs , and it aired for twenty-four years.

He would also rise up the ranks at Inland, becoming the company's director of personnel and recruitment before retiring in 1993. In 1994, he became the vice-president of human resources at the Chicago-based MacArthur Foundation, one of the largest foundations in the country. He is the recipient of an Emmy Award and a Peabody Award for his work on The Opportunity Line and has been featured in Who's Who-Black America and Industry . Lowry is married and the father of two children, and he lives in Chicago.

See how William E. Lowry, Jr. is related to other HistoryMakers
Donate Now
Click Here To Explore The Archive Today!