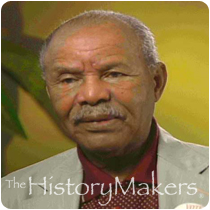 See how William Blair, Jr. is related to other HistoryMakers
Donate Now

Blair, a Negro League Baseball Museum inductee, pitched from 1946 to 1951 for the Indianapolis Clowns and other Negro League baseball teams. His baseball career included pitching a no-hitter in the Denver Post Tournament, playing with the late Winfield Welch, Jesse “Hoss” Walker, and Buster Haywood, and touring with Jesse Owens and the Harlem Globetrotters. Blair was instrumental in the development of the African American Museum’s Texas Sports Hall of Fame and serves on its advisory board. He was inducted in 1996 as a member of its inaugural class.

Blair founded the Highlight News (1947-1957). He also later founded the Southwest Sports News, a newspaper that specialized in publishing scores from Black college games throughout the United States. The paper was renamed The Elite News in 1960. One of the most influential black newspapers in the Dallas-Fort Worth area, Elite News created “The Elite News Awards Night,” which was the first African American awards ceremony in Dallas when it began in 1975.

Blair had been a civil rights activist for more than six decades. In 1986, Blair launched the first Dr. Martin Luther King, Jr., Day Parade, and this parade is now an institution in Dallas. Blair was a major force in local and state politics and was also an advocate for the Interdenominational Ministerial Alliance. In 2004, he founded the Religious Hall of Fame to honor African American ministers.

Blair lived in Dallas, Texas with Mozelle, his wife of sixty-three years. All of his children were involved in the family business.

See how William Blair, Jr. is related to other HistoryMakers
Donate Now
Click Here To Explore The Archive Today!