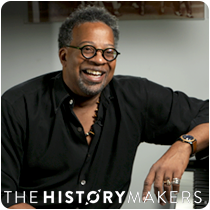 See how William Banfield is related to other HistoryMakers
Donate Now

Professor and composer William Banfield was born on March 24, 1961 in Detroit, Michigan to William Banfield and Anne Banfield. He attended Cass Technical High School in Detroit, Michigan and graduated in 1979. Banfield enrolled at the New England Conservatory of Music in Boston, Massachusetts and graduated with his B.M. degree in jazz studies in 1983. He later received his Th.M. degree from Boston University in 1988, and his D.M.A. degree from the University of Michigan in 1992.

Banfield accepted his first teaching position at Madison Park High School in Boston, Massachusetts. In 1983, he resigned from his position and founded BMagic Records. Two years later, Banfield founded Young Artists Development, Inc. After he received his D.M.A. degree in 1992, Banfield served as assistant professor of African American Studies/Music at Indiana University. In 1997, Banfield served as the endowed chair of humanities, professor of music, director of American cultural studies/jazz, popular, world music studies at the University of St. Thomas, Minnesota. He then became the W.E.B. DuBois fellow at Harvard University in 2002. The following year, Banfield was the visiting Atelier artist at Princeton University; and, in 2005, he was hired as a visiting professor of composition at the University of Minnesota. Banfield subsequently accepted an appointment at the Berklee College of Music as a professor and director of the Africana Studies program. In 2010, he was hired by Quincy Jones’ foundation called the QFoundation, to write a national music curriculum for American popular music.

Banfield has also released a number of albums which include Extensions of the Tradition in 1996, Striking Balance in 2004, Spring Forward in 2009, and Playing with Other People’s Heads in 2014. He was also the host of National Public Radio’s “Landscapes in Color: Conversations with Black American Composers” and an original program on WCAL at St. Olaf College entitled, “Essays of Note.” Banfield has authored seven books, completed six symphonies and two operas. In 2014, Banfield launched JazzUrbane, a contemporary jazz recording label. He has also served on the Pulitzer Prize composition panel.

William Banfield was interviewed by The HistoryMakers on November 17, 2018.

See how William Banfield is related to other HistoryMakers
Donate Now