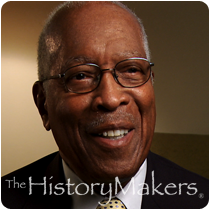 See how William Akins is related to other HistoryMakers
Donate Now

Academic administrator and educator during integration, William Charles Akins was born in 1932 in Austin, Texas. He attended segregated Blackshear Elementary School. He next went to Kealing Junior High School and then Anderson High School where he met W.B. Campbell who inspired him to become a principal. He graduated from Huston-Tillotson University with his B.A. degree in history in 1954 and received his M.A. degree from Prairie View A&M University in 1956. Akins also received his administrative certification from Southwest Texas State University.

Akins received an Honorary Doctorate of Humane Letters from Huston-Tillotson University in 1982. For his commitment to the Austin school district, in 1998, the district Board of Trustees voted to name Austin’s newest high school after Akins. The following year the groundbreaking ceremony for the W. Charles Akins High School was held and the school opened to more than 2,700 students.

See how William Akins is related to other HistoryMakers
Donate Now
Click Here To Explore The Archive Today!