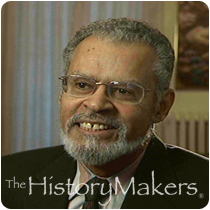 See how Willard Johnson is related to other HistoryMakers
Donate Now

Willard R. Johnson is professor emeritus of political science at the Massachusetts Institute of Technology (MIT). For over thirty years (1964-1996), his academic focus was on international relations and development policies and institutions with an emphasis on Africa. Throughout his career, he combined scholarship and teaching with political activism. In addition to African studies and comparative politics, he devoted energy and time to the economic development of inner city America. Johnson was a core leader in the creation of TransAfrica, a national lobbying group for African liberation and support.

Johnson was born in 1935 in St. Louis, Missouri. Both of his parents were born in Kansas. His father was a bacteriologist with the U.S. Public Health Service, which led the family to move several times as his father’s career advanced. His family included a brother and twin sisters. They moved to Tuskegee, Alabama, and then to Pasadena, California, in 1946, where Johnson joined the Pasadena Boys’ Club. Johnson graduated from Muir High School in Pasadena and went on to receive his B.A. degree in international relations at the University of California at Los Angeles (UCLA), where he was president of the student body during his senior year. At UCLA, he was a founding member of a chapter of the NAACP, which brought W.E.B. DuBois to the UCLA campus as a speaker. Johnson received his M.A. degree in African Studies with distinction from John Hopkins School of International Studies and his Ph.D. degree from Harvard University. His dissertation was on “Cameroon Reunification: The Political Union of Several Africas.” In 1964, he was appointed Assistant Professor of political science at MIT.

In 1966, Johnson returned to Cameron to extend his research and then turned his Harvard dissertation into a book, The Cameroon Federation, that was published by Princeton University Press. On leave from MIT from 1968 to 1970, he helped to establish and served as the executive director of a community-owned, non-profit economic development promotion complex, Circle, Inc., in Boston’s Roxbury neighborhood. Circle included a small business development center, an investment fund, a management-training institute and a consulting firm.

In 1972, Johnson directed the Africa Policy Task Force for the George McGovern for President committee. During the 1970s, he served on the Democratic Party Advisory Council’s Foreign Affairs Study Group. His earlier public service included two terms on the U.S. National Committee for UNESCO.

Johnson was one of the founders and senior advisors to the Boston Pan-African Forum, Inc. He led the Boston unit of TransAfrica in its “Free South Africa Movement” campaign, making the banning of South African Kruggerrand coins part of the anti-apartheid agenda of the U.S.

In 1991, Johnson founded and now directs the Kansas Institute for African American and Native American Family History (KIAANAFH). The Institute promotes the preservation, documentation and appreciation of family identity, traditions and achievements of members of African American and Native American communities of the Midwest. The Black History Bulletin (Jan. – Dec. 2001, Vol. 64) carries an article by Johnson on “The Great Escape” of Indians and Blacks into Kansas during 1861 and 1862.

Johnson co-authored with his wife, Dr. Vivian Johnson (whom he met as a UCLA student), West African Governments and Volunteer Development Organizations: Priorities for Partnership. The Johnsons, residents of Newton, Massachusetts, are the parents of two married daughters, Kimberley Johnson Ogadhoh, born in 1963, and Caryn Johnson, born in 1960.

See how Willard Johnson is related to other HistoryMakers
Donate Now
Click Here To Explore The Archive Today!