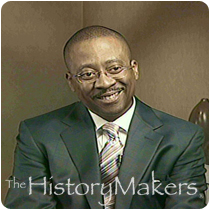 Favorite Color:
Blue
Favorite Food:
Lobster
Favorite Time of Year:
Spring
Favorite Vacation Spot:
Puerto Rico
Favorite Quote:
Do Unto Others As You Would Have Them Do Unto You.

Favorite Color:
Blue
Favorite Food:
Lobster
Favorite Time of Year:
Spring
Favorite Vacation Spot:
Puerto Rico
Favorite Quote:
Do Unto Others As You Would Have Them Do Unto You.

See how Willard "Chuck" Lewis is related to other HistoryMakers

Willard “Chuck” Lewis, President and CEO of One Georgia Bank, was born on April 9, 1961, in Lagrange, Georgia. After graduating from high school in 1979, he earned his B.A. degree in banking and finance at Morehouse College in 1983.

Lewis began his career in banking by working part time at an Atlanta, Georgia, based community bank while still a college student. He has worked at every level of community banking during his twenty-four years in the business.

In June of 2005, Lewis resigned as senior executive vice president & COO from Citizens Trust Bank after twenty-two years of working there and First Southern Bank (which merged with Citizens Trust in 1998) to found One Georgia Bank. On May 5, 2006, One Georgia opened in the 1180 Peachtree Building, one of Atlanta’s most prestigious and distinctive buildings. Under Lewis’ leadership, the bank capitalized with $24.2 million and over 400 shareholders. It marked the first time that a newly chartered bank was formed with over $20 million in capital in Georgia’s history. The bank caters primarily to companies with $3 million to $50 million in revenue and features some of the highest levels of technology found in any bank. One Georgia is now one of the fastest growing community banks in Georgia.

His past board involvement consists of the DeKalb Medical Center Foundation (former vice chairman); the Executive Board of Berry College's Campbell Business School; the National Bankers Association (past treasurer); the Sweet Auburn Avenue Business and Improvement Association (past chairman).

In 1997, Lewis was selected by Georgia Trend Magazine as one of the “Forty under Forty” rising stars in the state of Georgia. This honor recognizes the top forty leaders in Georgia under the age of forty. Nominees are judged on professional accomplishments, civic involvement, and giving back to the community.

A graduate of Leadership Atlanta’s Class of 1999, Lewis is a lifetime member of the Morehouse College Alumni Association and is a member of 100 Black Men of DeKalb County. He has served as an editorial columnist for several newspapers, and he has written an entry on the history of African American Banks in Georgia for The New Georgia Encyclopedia.

See how Willard "Chuck" Lewis is related to other HistoryMakers
Click Here To Explore The Archive Today!