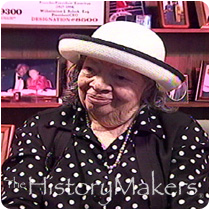 See how Wilhelmina Rolark is related to other HistoryMakers
Donate Now

Lifelong civil rights and community activist, attorney and politician Wilhelmina Rolark was born on September 27, 1916 in Portsmouth, Virginia. She attended Truxton elementary school in the Truxton area of Portsmouth until seventh grade. In 1933, Rolark graduated from I.C. Norcum High School in Portsmouth .

Following her high school graduation, Rolark attended Howard University from 1933-1937 where she earned bachelor’s and master’s of arts degrees in political science. While at Howard, she studied under Ralph Bunche. In 1944, while working at the Treasury Department and going to law school at night, she earned her bachelor’s of law degree from the Robert H. Terrell Law School in Washington, D.C.

As a young attorney practicing law in the 1940s, she worked on many civil rights cases. In 1970, she founded the National Association of Black Women Attorneys. Following on the footsteps of a successful law career, she set her sights on politics.

In 1969, Rolark and her husband, the late Dr. Calvin Rolark, founded the United Black Fund, a non-profit organization that provides funding to community-based organizations. Rolark served as the group’s General Counsel, where she won major legal battles against United Givers Fund and the Civil Service Commission discriminating against black and other minorities.

In 1976, Rolark was elected to represent residents of Ward 8 on the Washington, D.C. city council, where she went on to serve four consecutive terms. While on the council, she chaired several committees including the committee on Employment and Economic Development, Public Service and Consumer Affairs and Judiciary. Rolark also served on the Sentencing Guidelines Commission of the D.C. Superior court.

As a legislator, Rolark was responsible for a number of laws including the legislation that created the D.C. Energy Office, the Bank Depository Act, the law that triples the penalties for PCP distribution and the law that brought cable television to D.C.

Upon the untimely death of her husband in 1994, she was unanimously elected as the President /CEO of the United Black Fund, a position she held for twelve years. Rolark also served on the National Board of the Southern Christian Leadership Conference.

See how Wilhelmina Rolark is related to other HistoryMakers
Donate Now
Click Here To Explore The Archive Today!