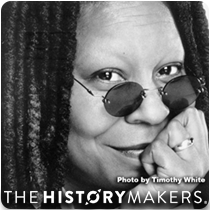 See how Whoopi Goldberg is related to other HistoryMakers
Donate Now

Goldberg studied with theater teacher Uta Hagen at HB Studio in New York City during the 1970s before moving to Berkeley, California, where she performed with the Blake Street Hawkeyes, an experimental theater group. In the early 1980s, Goldberg began developing The Spook Show, a one-woman series of character monologues. She eventually took the show to the Dance Theater Workshop in New York, where director Mike Nichols asked her to perform on Broadway. Renamed Whoopi Goldberg, the show with Goldberg caught the eye of Steven Spielberg during its 1984 to 1985 run, who cast her in the starring role of Celie in the 1985 film adaptation of Alice Walker’s The Color Purple, earning her an Academy Award nomination for Best Actress. Goldberg went on to appear in the 1990 film Ghost, for which she won the Golden Globe and Academy Award for Best Supporting Actress. In 1992, Goldberg starred as Sister Mary Clarence in Sister Act, reprising her role in the 1993 film Sister Act 2: Back in the Habit. The highest paid actress at the time, Goldberg went on to appear in The Long Walk Home (1990), Ghosts of Mississippi (1990), the South African film Sarafina! (1992), Made in America (1993), The Lion King (1994), Eddie (1996), How Stella Got Her Groove Back (1998) and Girl, Interrupted. From 1998 to 2002, Goldberg executive produced and appeared on the popular game show, Hollywood Squares. A lifelong Star Trek fan, Goldberg appeared in the recurring role of Guinan on Star Trek: The Next Generation. Goldberg has authored numerous bestselling books for children and adults, including Book and the Sugar Plum Ballerinas series. In 2007, Goldberg became a moderator on the morning talk show The View alongside Barbara Walters, Joy Behar, Sherri Shepherd, and Elizabeth Hasselbeck. She has continued acting throughout the 2000s and 2010s, appearing in films such as For Colored Girls (2010), Big Stone Gap (2014), and Nobody’s Fool (2018). She has produced numerous projects for television and stage.

Goldberg has received Emmy, Grammy, Tony, and Oscar awards, making her the first African American to receive all four awards. In 2017, she was named a Disney legend by the Walt Disney Company.

Goldberg has one daughter, three grandchildren, and one great grandchild.

Whoopi Goldberg was interviewed by The HistoryMakers on October 5, 2016.

See how Whoopi Goldberg is related to other HistoryMakers
Donate Now
Click Here To Explore The Archive Today!