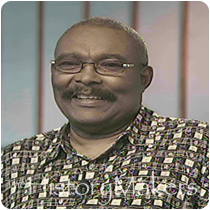 See how Wendell Logan is related to other HistoryMakers
Donate Now

Composer, jazz musician, and music educator Wendell Morris Logan, Ph.D., was born on November 24, 1940, one of three sons born to Dorothy Mae Horton and Simuel Morris Logan. Logan completed his elementary and secondary school education at the McDuffie County Training School and the R.L. Norris High School. Logan earned his bachelor’s of science degree in music from Florida A & M University in 1962, his master’s of music degree from Southern Illinois University in 1964, and his Ph.D. from the University of Iowa in 1968. In 1994, Logan was a fellow at the Rockefeller Study Center in Bellagio, Italy.

As a musician, Logan performed throughout the United States and in Europe, Africa, and the Caribbean. Logan’s music was recorded on several labels, including Orion, Golden Crest, University of Michigan Press, Morehouse College Press, and RPM Records. Logan received numerous prizes and awards, including grants from the National Endowment for the Arts, and the Ohio Arts Council, ASCAP Awards, a Guggenheim Award, the Cleveland Arts Prize, and the Lakond Award from the American Academy of Arts and Letters. Later compositions of Logan’s included “Doxology Opera: The Doxy Canticles” and “Ask Your Mama.”

Logan and his wife Betty raised two children, Wendell Jr. and Philecia; they also had one granddaughter, Karen.

See how Wendell Logan is related to other HistoryMakers
Donate Now
Click Here To Explore The Archive Today!