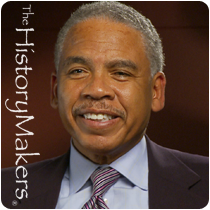 See how Wendell Holland is related to other HistoryMakers
Donate Now

Attorney Wendell Holland was born on February 10, 1952 and raised in Ardmore, a community in Lower Merion Township in Pennsylvania. His parents are Jeremiah William, Sr. and Jane Foster Holland. Holland attended Lower Merion High School. He then attended Fordham University on a full basketball scholarship, graduating in 1974 with a B.S. degree in urban studies and psychology. He also attended Rutgers School of Law, where he was class president.

In time, he specialized in energy and utility regulation, and worked with the New York Public Service Commission and the Pennsylvania Public Utility Commission (PUC). He served as a judge and in 1990 was appointed as commissioner of PUC. After practicing law and serving as a corporate executive, he became chairman of the Pennsylvania Public Utility Commission in 2004 where he was responsible for deciding utility mergers and acquisitions; for the implementation of legislation that triggered comprehensive and substantial changes to renewable energy; telecommunication reform; and consumer services legislation.

Holland also served as vice president and general counsel of the Global Bioscience Development Institute. In 2002 and 2003 respectively, Holland was appointed to coordinate the City of Philadelphia Trade Missions with China and South Africa.

Holland has served on three public company boards. He was elected to the board of directors for Aqua America, Inc. in 2011. He was also named to the board of trustees for Main Line Health Inc. in 2012. Holland was also the 1994 recipient of the annual award for excellence for the National Association of Water Companies, Pennsylvania chapter. He was named one of Philadelphia’s 100 Most Influential African Americans. In 2007, he became the recipient of the Whitney M. Young, Jr. Service Award for the Cradle of Liberty Council of the Boy Scouts of America. Holland has served as president of the Mid-Atlantic Conference of Regulatory Utility Commissions and the Organization of PJM States. In 2007, he was the treasurer of the National Association of Regulatory Utility Commissioners (NARUC), where he also served on the board of directors and as chairman of its audit and investment committees. Holland is married to Anita Persaud Holland, and they have three children.

Wendell Holland was interviewed by The HistoryMakers on May 24, 2012.

See how Wendell Holland is related to other HistoryMakers
Donate Now
Click Here To Explore The Archive Today!