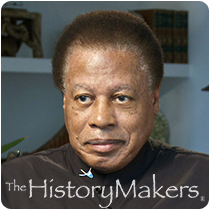 See how Wayne Shorter is related to other HistoryMakers
Donate Now

Saxophonist and composer Wayne Shorter was born on August 25, 1933 in Newark, New Jersey. Shorter played the clarinet at Newark Arts High School, but switched to the saxophone before entering New York University in 1952. After graduating with his B.M.E. degree in 1956, Shorter worked for a short time with composer John Eaton until he was drafted into the U.S. Army for two years.

In 1958, Shorter briefly played with Horace Silver, and then joined Maynard Ferguson's big band. The following year, he joined Art Blakey and the Jazz Messengers where he remained until 1963, eventually becoming the band's music director. During the Blakey period, Shorter also made his debut on records as a leader, and produced several albums for Chicago's Vee-Jay label including Introducing Wayne Shorter, Second Genesis, and Wayning Moments.

In September of 1964, Miles Davis invited Shorter to join his quintet, completing a lineup that included Herbie Hancock, Ron Carter and Tony Williams. Shorter stayed with Davis until 1970 and was one of the band's most prolific composers, contributing songs like "E.S.P.," "Pinocchio," "Nefertiti," "Sanctuary," "Footprints," "Fall," and "Prince of Darkness." Shorter also became a productive solo artist for Blue Note Records during this period, recording eleven albums including Night Dreamer, JuJu, Speak No Evil, The All Seeing Eye and Adam's Apple.

In November of 1970, Shorter teamed up with Joe Zawinul to form the jazz fusion band Weather Report. Four years later, he released the album Native Dancer, which featured Herbie Hancock and Brazilian composer and vocalist Milton Nascimento. In the late 1970s, Shorter toured with Freddie Hubbard, Hancock, Ron Carter, and Tony Williams as V.S.O.P. He then left Weather Report in 1985 and went on to record three albums on Columbia Records from 1986 to 1988.

Shorter re-emerged in 1992 with Wallace Roney and the V.S.O.P. rhythm section in the "A Tribute to Miles" band. In 1995, now on the Verve record label, Shorter released the solo album High Life; and, in 1997, released 1 1 with Herbie Hancock. Footprints Live! was released in 2002 under his own name with a new quartet, followed by Alegría in 2003 and Beyond the Sound Barrier in 2005. Without a Net, his first recording for Blue Note Records in forty-three years, was released in February of 2013.

In all, Shorter recorded over twenty albums as a bandleader, and appeared on numerous others, including several Joni Mitchell studio albums. He has also toured and recorded alongside Carlos Santana, among others. Shorter has received ten Grammy Awards; the Montreal International Jazz Festival’s Miles Davis Award; a Jazz Journalists Association Jazz Award; and Honorary Doctorate of Music degrees from the Berklee College of Music and New York University.

Wayne Shorter was interviewed by The HistoryMakers on November 11, 2014.

See how Wayne Shorter is related to other HistoryMakers
Donate Now