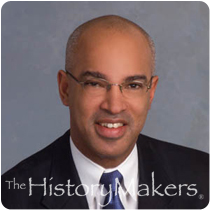 See how Wayne M. Hewett is related to other HistoryMakers

Corporate executive Wayne Hewett was born on October 28, 1964 in Kingston, Jamaica. Hewett grew up in a house of educated professionals; his father, Audley Maylor Hewett, was a chief executive officer, and his mother, Lorna Shelly Hewett, was a registered nurse and business owner. In the 1970s, the family moved to Miami, Florida where in 1981, Hewett received his diploma from Palmetto High School. He entered Stanford University that same year where he received his B.S. degree in industrial engineering in 1985 and continued his studies to earn his M.S. degree in industrial engineering in 1986.

Hewett began his career working as a member of the Manufacturing Management Program with assignments at GE Simulation & Control Systems and GE Aircraft Engines. In 1988, he graduated from the program and joined GE Corporate Audit Staff as a staff auditor. During the 1990s, he was promoted to Executive Audit Manager of GE Corporate in 1992, and then joined GE Power Generation as manager of Engineering Design Systems in 1993. In 1994, he moved to GE Silicones as Manager of Materials and Logistics, and in 1995, he moved again to GE Plastics as General Manager of Petrochemicals and Global Sourcing.

In 2001, Hewett was named Vice President of General Electric Company and served as president of GE Plastics Pacific, located in Shanghai, China, and President and CEO of GE Toshiba Silicones, located in Tokyo, Japan. Here, he led his teams and divisions to double-digit growth. In 2006, Hewett became the president and chief executive officer of Apollo Management, a private investment firm. He is a member of several organizations including the American Foundation for The University of the West Indies and the Special Olympics of New York.

Hewett resides in Connecticut with his wife and family.

Hewett was interviewed by The HistoryMakers on January 3, 2007.

See how Wayne M. Hewett is related to other HistoryMakers
Click Here To Explore The Archive Today!