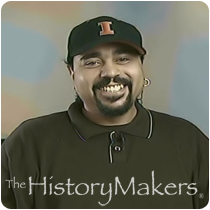 See how Wayne Baker Brooks is related to other HistoryMakers

Wayne Baker, who performs as Wayne Baker Brooks, was born in Chicago on April 30, 1970, to Jeannine Baker and Lee Baker, Jr.—better known as legendary blues singer and guitarist Lonnie Brooks. Although he came from a musical family—his older brother, Ronnie Brooks, began performing with their father’s band in 1986—Brooks waited until he graduated from Percy L. Julian High School in 1988 to learn guitar. Brooks was able to learn from the best, as Junior Wells taught him to play his “Messin’ with the Kid.”

In November 1988, Brooks became his brother’s road manager, and he soon embarked upon a performance career of his own when he joined his father’s band. Performing in more than 150 shows a year with Lonnie and Ronnie Brooks, Wayne Brooks honed his style. He has since worked with other top Blues musicians including Buddy Guy, Otis Rush, Jonny Lang, and George Thorogood.

In 1998, Brooks co-authored Blues for Dummies, collaborating with his father, rocker Cub Koda, and Dan Aykroyd. The following year, he performed for Hillary Rodham Clinton at Chess Records in Chicago. In 2003, Brooks released his first album, Mystery, on his own label, Blues Island Records. That year, he also performed before a crowd of 52,000 at the 2003 Baseball Allstar Game in Chicago. In 2004, Brooks was a headliner at the Chicago Blues Festival.

See how Wayne Baker Brooks is related to other HistoryMakers
Click Here To Explore The Archive Today!