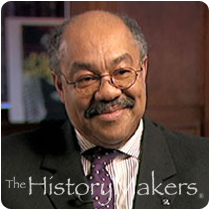 Favorite Color:
Blue
Favorite Food:
Fish
Favorite Time of Year:
All Seasons Except Winter
Favorite Vacation Spot:
St. Martin
Favorite Quote:
I've Got It. Do You Know What I Mean?

Favorite Color:
Blue
Favorite Food:
Fish
Favorite Time of Year:
All Seasons Except Winter
Favorite Vacation Spot:
St. Martin
Favorite Quote:
I've Got It. Do You Know What I Mean?

See how Warrick L. Carter is related to other HistoryMakers
Donate Now

Warrick Carter was born in Charlottesville, Virginia, on May 6, 1942, the second of four children. Attending Tennessee State University in Nashville, Carter earned a B.S. in music education in 1964, followed by advanced study in percussion at the Blair Academy of Music at TSU from 1964 to 1965. Carter earned his master's degree in music from Michigan State University in 1966, and a Ph.D. in music education from the school in 1970.

Carter began his career in education in 1964, teaching instrumental music and working as the band director at Alton Park Junior High in Chattanooga, Tennessee. In 1966, he became an assistant professor of music at the University of Maryland, Eastern Shore. In 1971, Carter was selected to be one of the inaugural leaders of Governors State University in Park Forest, Illinois, as a professor of music. Carter was promoted to the position of coordinator of the Division of Fine and Performing Arts in 1976, and in 1979, to division chairman. In 1984, Carter was hired as provost and vice president of academic affairs at the Berklee College of Music in Boston, Massachusetts. After twelve years at Berklee, Carter became the director of entertainment arts for Walt Disney Entertainment, where he was responsible for managing all internship programs, education and performance opportunities for college students at all of Disney's global parks. Carter was hired by Columbia College of Chicago as president in 2000.

Carter wrote extensively about music, as well as performed at such venues as the 7th Annual International Jazz Festival in Montreaux, Switzerland. In 1996, Carter was inducted into the International Jazz Educators Hall of Fame. That same year, Walt Disney established a scholarship in his name. He was listed in Who's Who in Black America and served on a number of boards of directors, including the International House of Blues Foundation and the New Orleans Center for the Creative Arts. Carter and his wife, Laurel, lived in Chicago.

See how Warrick L. Carter is related to other HistoryMakers
Donate Now
Click Here To Explore The Archive Today!