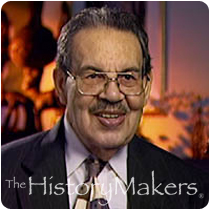 See how Warren Marr, II is related to other HistoryMakers

Founder of the Amistad Research Center, Warren Q. Marr II has been a leading advocate for active preservation of African American history and culture for more than fifty years. Born on July 31, 1916, in Pittsburgh, Marr studied journalism and printing at Wilberforce University.

Following graduation, Marr was hired in 1938 as a linotype operator at The St. Louis Argus. From 1939 to 1942, he worked in that capacity for The Plaindealer in Kansas City, Kansas, rising to the post of assistant editor. Marr then joined the business world as a concert promoter with a host of clients, including the well-known singer, William Vesey. From 1968 to 1974, Marr was hired to reenergize the NAACP's hallmark publication as editor of The Crisis.

However, it was in the early 1960s that Marr first learned of the now-famous Amistad trial while working at the American Missionary Association. Here, Marr's interest in preservation was formed. He joined forces with Clifton Johnson and created the Amistad Research Center. Marr would spend the next few decades crisscrossing the United States, speaking to African American individuals and groups, encouraging them to preserve their records. In 1966, he co-founded the Amistad Research Center as a unique repository for African American paper papers and other artifacts. This center was housed at Dillard University before moving to its current home at Tulane University. Currently, the Center serves as a research repository and library housing more than 10 million items.

Upon retirement, Marr decided to pursue another method for preserving the Amistad legacy. Marr aimed to educate the public about this important chapter in American history when a slave trip was commandeered by a group of slaves off the coast of the United States, resulting in an internationally significant case that employed the talents of John Quincy Adams. In 1991, Marr helped found Amistad Affiliates, a nonprofit organization dedicated to the creation of a replica of the historic schooner Amistad for purposes of keeping the Amistad legacy alive. After years of construction, the ship has sailed to ports around the world promoting peace and goodwill and offering educational curriculum.

Marr and his wife, attorney Carmel Carrington, have been married since 1948 and have two adult children, Warren Quincy III and Charles Carrington. Warren Marr II and his wife live in Valley Cottage, New York.

See how Warren Marr, II is related to other HistoryMakers
Click Here To Explore The Archive Today!