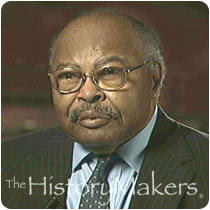 See how Walter Mason, Jr. is related to other HistoryMakers
Donate Now

Production manager, stage actor, stage director, and stage production manager Walter Mason, Jr. was born on January 26, 1926, in Detroit, Michigan. His mother, Joanna Columbus Mason, a school teacher, and his father, Walter Mason, Sr., a skilled laborer, reared Mason in a church and community-oriented environment. After graduating from Detroit’s Northwestern High School, Mason attended Wayne State University, where he earned his B.A degree in theater and business administration. Years later, Mason attended the Detroit College of Law while he continued to pursue a career in theater.

In a 1952 adaptation of Richard Wright’s book Native Son, he portrayed its chief character “Booker Thomas” at the World Stage in Detroit, Michigan. His theatrical performances include his role as “Othello” in seven separate productions of Othello and “Caliban” in two productions of The Tempest. Mason has also been an instrumental figure in notable Broadway productions such as Purlie Victorious and A Streetcar Named Desire. Beyond acting, Mason served as a producer, director and artist for The Good Book Sings on WJR Radio and appeared on WXYZ TV’s, Showtime at the Apollo as the master of ceremonies. He collaborated with choreographer, Alvin Ailey, in 1961 as the musical and production manager of African Holiday. Six years later, Mason became the production manager for The Emperor Jones, which starred actor James Earl Jones. Throughout his career, Mason has worked closely with many celebrities, including Sammy Davis, Jr., Duke Ellington, Frank Sinatra, Liza Minnelli, Jimmy Durante, Diana Ross, Dionne Warwick, Ella Fitzgerald, Lola Falana, Jackie Gleason and Gladys Knight and the Pips. As a private speech and drama coach, Mason has worked with many public figures and film and television performers.

Mason served as an associate to the dean of Yale University School of Drama at both Yale and on Broadway. In 1983, Mason produced and directed a theatrical presentation at the Kennedy Center in Washington, D.C. featuring aspiring young actors from black colleges and universities for The National Association for Equal Opportunity in Higher Education. The following year, Mason directed the production of the Pulitzer Prize winning play, A Soldier’s Story, at Detroit’s Fisher Theater.

Mason is the entertainment director at the Las Vegas Hilton Hotel and the founder and artistic director of the Aldridge Theater Company, Inc.

See how Walter Mason, Jr. is related to other HistoryMakers
Donate Now
Click Here To Explore The Archive Today!