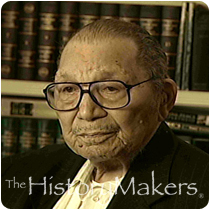 See how Walter L. Gordon, Jr. is related to other HistoryMakers

Civil rights attorney and photo collector Walter Gordon, Jr. was born on June 22, 1908, in the Ocean Park neighborhood in Santa Monica, California. Originally from New Orleans, Louisiana, Gordon’s parents were well educated and served as community leaders. His father was a mail carrier in South Pasadena and worked for African American owned newspapers and publications including: "The Messenger," "The Negro World," "The Chicago Defender" and "The Crisis." As a youth, Gordon also helped to keep the African American community informed by delivering newspapers to homes and barbershops. He soon became a familiar face in Los Angeles and was recognized by many of its elite crowd.

Gordon attended University of Southern California (USC) Preparatory School where he graduated and went on to enroll at Ohio State University in Columbus, Ohio. After graduating with his degree, he earned his J.D. degree. In 1936, at a time when the Los Angeles legal system was plagued with segregation, Gordon became one of the city’s first attorneys when he established his law practice in the same facility as one of Los Angeles’s oldest African American publications, "The California Eagle." As a neighbor of the publication, he also began collecting photographs given to him by the newspaper’s editor. During the next few decades, his legal practice became a prominent and vital institution in Los Angeles’s downtown and Central Avenue District. He represented a wide assortment of public servants, athletes and entertainers.

In the mid-1940s, when the Los Angeles Police Department began targeting African American night club owners for operating during late night hours without a special permit, Gordon successfully persuaded the court to allow various African American night club owners a special permit to operate. Then, in 1947, he successfully represented a former Hollywood cameraman and owner of Shepp’s Playground, Gordon Sheppard, in an entrapment case. Gordon also represented legendary jazz vocalist, Billie Holliday, in a case in which she allegedly slashed a heckler with a knife after he interrupted her performance of “Strange Fruit.”

Gordon has kept a special collection of memorable African American photographs throughout his career. His collection includes valuable photographs of the Langston Law Club, composer Count Basie, musician Louis Armstrong and the black resort Val Verde. In 2003, he was awarded the Shattuck-Price Outstanding Lawyer Award from the Los Angeles County Bar Association, and in 2004, he retired after more than sixty years of practicing law. Gordon's photo collection is housed and made available for scholarly and public access through the Edward L. Doheny, Jr. Memorial Library's Digital Collection, at the University of Southern California.

Walter L. Gordon was interviewed by The HistoryMakers on April 3, 2008.

See how Walter L. Gordon, Jr. is related to other HistoryMakers
Click Here To Explore The Archive Today!