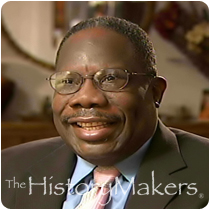 See how Walter J. Turnbull is related to other HistoryMakers

Founder and director of the Boys Choir of Harlem, Walter J. Turnbull was born in Greenville, Mississippi on July 19, 1944. He has traveled a long road from the fields of the South where he chopped cotton as a child to attend Coleman High School where he joined the choir directed by Herticene Jones. Jones, a demanding teacher, encouraged Turnbull to attend Tougaloo College where he graduated with honors in classical music and vocal performance.

Turnbull eventually settled in New York City where he aspired to have a career as an operatic tenor. He continued his musical training at Manhattan School of Music and began performing with the New York Philharmonic. His professional career was sidetracked after taking a job teaching music in the basement of the Ephesus Church in Harlem. The choir quickly moved from being a performing ensemble for the church services to one presenting concerts and recitals in public venues with its repertoire of Bach chorales, Mozart, spirituals and hymns. The choir was eventually named the Boys Choir of Harlem. In 1986, Turnbull created the Choir Academy of Harlem as a school serving fourth through eighth grades. The program has expanded over the years to become a college preparatory school serving over five hundred students in grades four through twelve.

In 1997, Turnbull was awarded the National Medal of Arts. In 1998, he received the Heinz Award in the Arts and Humanities and the Readers Digest American Heroes in Education Award. He was also named to the New York Black 100 by the Schomburg Center. In 2003, Turnbull received an honorary doctorate of music degree for his lifelong commitment to music, both as an accomplished performer and as the founder of the Boys Choir of Harlem.

Turnbull was interviewed by The HistoryMakers on July 31, 2005.

See how Walter J. Turnbull is related to other HistoryMakers
Click Here To Explore The Archive Today!